Police in LVergne are looking for suspects in at least three convenience store thefts. Over the weekend on Saturday, La Vergne Police report two black females entered three convenience stores and stole money from each business by way of prepaid credit card fraud. In at least one of the thefts, the pair was accompanied by a black male. They were able to illegally obtain over $1,000. Their identity is currently unknown but surveillance footage has been made available. We have photos from that and descriptions of the suspects on our website at WGNSRadio.com.

La Vergne Police ask if you have information that will lead to the identities of these suspects to call 793-7744.

DESCRIPTIONS:
The suspect descriptions are as follows: #1: heavyset black female with shoulder length hair, wearing a pink or peach colored shirt with "Old Navy" written across the front and blue jean pants. #2: heavyset black female with neck length hair, wearing a blue shirt with "CENTRAL" and what is believed to be a school logo across the front with "Harvey" & "1" across the back, and blue jean pants. #3: Medium build black male with short hair and mustache, wearing a black shirt and black pants. In one of the available surveillance files, a dark colored minivan is seen pulling into one of the victimized store parking lots and parks in the direction of where the suspects walk into the store from. 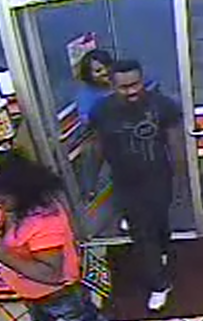