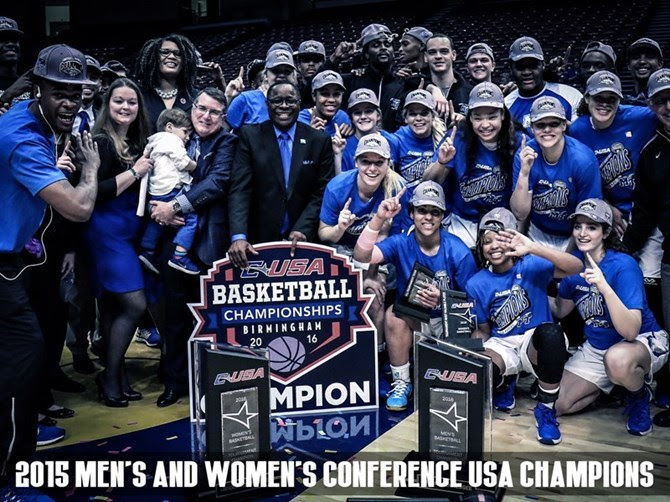 Middle Tennessee's women's basketball team is headed back to the NCAA Tournament following another dominant performance in the C-USA Championship.

The second-seeded Blue Raiders (24-8) started strong and rolled to a 70-54 win against fifth-seed Old Dominion to capture their second C-USA Championship in their third season in the league. The Lady Raiders also won in 2014.

Middle Tennessee became only the second school in C-USA history to have its men's and women's teams win the championship in the same year after the men claimed their title earlier in the day. Cincinnati did it in 2002. It also marked just the second time in program history that both teams claimed tournament titles in the same season. The other time was 1985.

"We have had some really good teams and some teams that have accomplished great things," Insell said. "I have to say I am probably more proud of this team as any I've coached because of everything they have overcome and the way they have handled everything. This is just a very special group of young ladies."

Middle Tennessee tasted victory for the sixth straight game and won for the 16th time in its last 17 contests. It rode that momentum from the outset against Old Dominion.

It was another outstanding team effort from an offensive and defensive standpoint as every player who played scored. Tournament MVP Ty Petty led the way with 19 points, seven assists and six rebounds. Petty also set a new single-season assist record at Middle Tennessee. Her seven helpers pushed her season total to 188, besting the previous mark of 185 set by Heather Prater in 1995.

"Our team was focused and we approached this as we have any other game," Petty said. "We stuck to our rules and fundamentals. We followed our scout and trusted our coaches and one another."

All-Tournament performer Brea Edwards had her 10th double-double of the season in the title game, pouring in 16 points and ripping 11 rebounds. Edwards scored all 16 of her points in the second half. Abbey Sissom also continued her stellar play with 11 points as she scored double figures in every tournament game. She was 3-for-5 from 3-point range but it wasn't Sissom's offense that was the story.

Sissom's defense on All-Tournament performer Jennie Simms was stifling. Simms finished with 21 points but on 6-for-24 shooting. Sissom's smothering defense held her to 3-for-11 shooting and eight points in the first half as Middle Tennessee built a 34-22 halftime advantage.

"Teamwork," Insell said. "That's what led this team to a championship. They exemplify everything that is good about college basketball. They played hard and they respect the game and one another. I believe the players really are one another's biggest fans."

Middle Tennessee is making its 13th consecutive postseason appearance because of its team defense and strong presence on the boards. In its 61-58 buzzer-beating loss against Old Dominion earlier this season, the Lady Monarchs dominated the Blue Raiders on the boards, 40-20.

The Blue Raiders won the battle of the boards 43-40 Saturday with Lyon and Edwards combining for 24 of the caroms. Middle Tennessee's post players combined for 22 rebounds.

"Coach Insell stressed the importance of getting on the boards and blocking them out," Lyon said. "We really took that to heart. Old Dominion is strong and physical and they work hard so we knew we had to focus on that part of the game."

Middle Tennessee capped a dominant tournament performance with another double-digit win. The Blue Raiders won all three tourney games by double figures and had four players average double figures. They allowed an average of 49.7 points against their three foes and the average margin of victory was a whopping 21.3 points per game.

"I thought the difference in the game was our fast start," Insell said. "We started strong and shot the ball well overall."

Old Dominion made a run in the third quarter and cut the lead to nine twice, but Edwards, Warden and Sissom each hit clutch 3-pointers in the final minutes of the third frame to push the lead back to 15, 48-33, going to the fourth quarter.

The Blue Raiders will learn their NCAA Tournament destination during the NCAA Selection Show Monday.