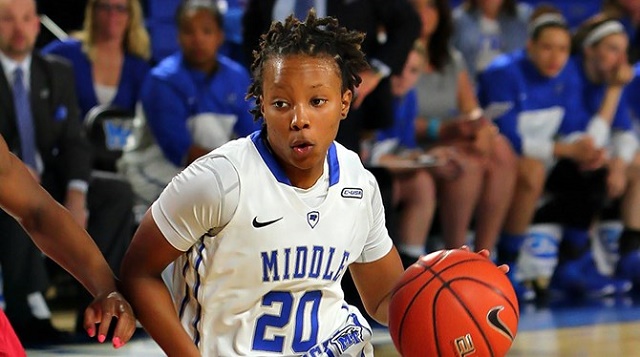 The Middle Tennessee women's basketball team advanced to the Sweet 16 of the Women's National Invitational Tournament (WNIT) with a 70-60 win over Arkansas State in front of 2,806 in the Glass House Sunday.

With the victory, Middle Tennessee (23-9) won multiple games in a national postseason tournament for the first time and punched its ticket into the WNIT Sweet 16. The Blue Raiders improved to 12-0 all-time against the Red Wolves (24-11) at Murphy Center.

Middle Tennessee will now host Ole Miss in Round 3 of the WNIT Thursday night at 7pm. Blue Raider Network coverage with Dick Palmer on NewsRadio WGNS will begin at 6:30pm.

Four players in double figures and a strong-second half performance propelled MT past its former Sun Belt Conference foe. MT also held a dominating 51-28 edge in rebounding with a .50 percent-plus offensive rebounding rate.

Sophomore Ty Petty registered a team-high 22 points (17 in the second half) to go along with five boards and four assists. Junior Brea Edwards posted her third double-double in five games with 18 points on an efficient 7-for-11 shooting from the field and12 rebounds.

Sophomore Olivia Jones posted her 12th double-double of the season with 12 points and 12 rebounds, and freshman Rebecca Reuter rounded out the leading scorers with a career-high 10 points on 5-for-7 shooting and six boards.

MT also did a better job protecting the ball against the pesky Red Wolves, turning over the ball just two times in the second half while committing nine miscues in the first half.

Leading by one, 28-27 with 18:52 left in the second half, the Blue Raiders put together a 14-2 run, including five straight points by Jones to ignite the crowd.
Jones and Petty combined for 12 points during the run, and Petty would cap off it off with a layup and a free throw.

From that point on MT lead by double digits and eventually led by as much as 19 with 3:29 left in the contest after Edwards found Petty for a trifecta.

Before the second half surge, MT struggled from the field in the first half connecting on just 10-of-34 shots en route to both teams going into the locker room tied at 25-all.

No team led by more than four points in the first stanza as there was five ties and nine leads exchanged. Edwards scored eight of the team's first 13 points after connecting on a 3-pointer from the right corner to give MT a 13-12 lead.

Both teams would go back and forth until Arkansas State took a three-point lead, 23-20. A Petty 3-pointer and an Edwards layup gave MT a 25-20 lead after a 5-0 spurt before an ASU buzzer beater tied the half.

The starters stepped up in the game as 69 of the 70 points came from the starting five.