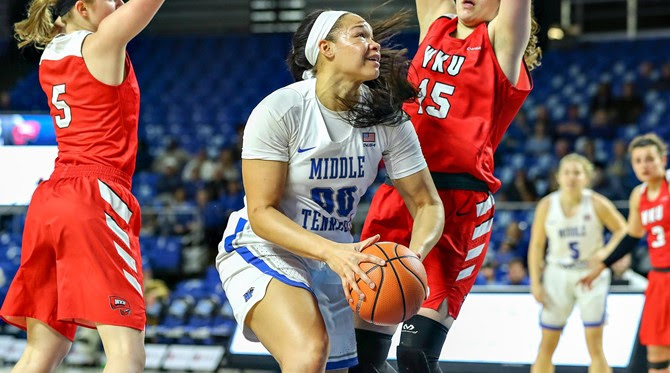 Middle Tennessee will face Ball State in the first round of the Women's NIT in Muncie, Ind., Thursday. Game time has yet to be announced. The game will be broadcast on NewsRadio WGNS! Pregame coverage begins at 5:30pm with a 6pm tipoff.

The Lady Raiders (18-12) are in the women's basketball national postseason for the 13th consecutive year under Head Coach Rick Insell, and the 15th straight overall, after earning an at-large invitation to play in the 2018 WNIT Monday night.

Ball State (24-6) was second in the Mid-American Conference's West Division, behind champion Central Michigan. Ball State lost in the quarterfinals of its conference tournament, as did Middle Tennessee. The Cardinals are in the WNIT for the sixth straight season.

Middle Tennessee is making consecutive trips into the WNIT after reaching the third round last season. The Middle Tennessee/Ball State winner will face the winner IUPUI/Purdue, being played at IUPUI.

The only other meeting between Middle Tennessee and Ball State took place in the 2015 WNIT, with the Lady Raiders claiming a 69-58 win in Murfreesboro on their way to an appearance in quarterfinals.