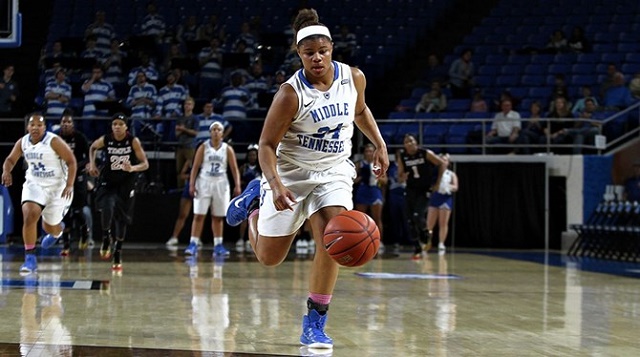 The Middle Tennessee women's basketball team suffered a 69-57 defeat at the hands of Temple Sunday afternoon in the Murphy Center, ending the historical run in the National Women's Invitation Tournament and the 2014-15 season.

Junior Brea Edwards corralled an impressive 20 rebounds, marking a career-high and a new postseason record that was previously held by Icelyn Elie and Ebony Rowe back in the 2012 NCAA Tournament against Vanderbilt.

Sophomore Olivia Jones scored a game-high 24 points on seven made field goals and shooting 7-of-8 from the charity stripe to go along with five steals. Sophomore Ty Petty scored 10 points on made buckets.

But a cold shooting first half and a 20-point deficit for Middle Tennessee (24-10) would be the story of the night as it was too much to overcome despite coming back to cut the Temple lead to single digits on two occasions in the second half.

The Blue Raiders mightily struggled on offense and couldn't get on track in the first half as they shot just 15.6 percent from the field for the lowest field goal percentage this season in any half.

Middle Tennessee came out in the second half on a 15-0 run over the first 3:00 of the second half to pull within five, 35-30. The Blue Raiders hit five of their first seven shots while holding the Owls to a 5:08 scoring drought.

All five starters scored during the run that was started by a pair of Edwards free throws then later capped off by a Petty layup.

That was the closest the Blue Raiders were to coming back as Temple again answered with seven straight points to go ahead, 62-49, and regain momentum en route to the victory, and advance to the WNIT Final Four to play West Virginia.

But the Blue Raiders did have a solid season, finishing the season with at least 20 wins for the 12th straight season, a trip to the Conference USA semifinals and the farthest MT has made it in any postseason making it to the Quarterfinals in the WNIT.