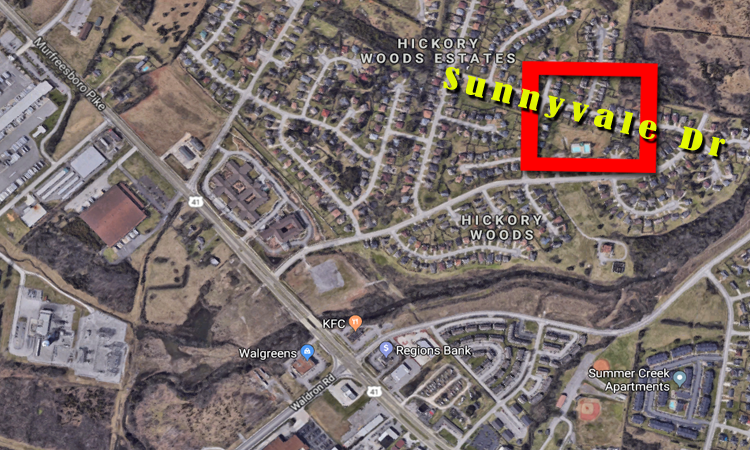 UPDATE: At 4:08 a.m. Monday, June 2nd a LaVergne Police officer attempted to pull over a driver on Sue Ellen Drive after noticing the vehicle did not have any working brake lights.

The officers followed the driver for a time and noticed the subject was making multiple turns and accelerating, possibly attempting to get away from the officer. The officer attempted to pull over the driver, who did not stop the vehicle. While pursuing the driver other officers attempted to spike the car but did not get the device deployed in time.

The driver began going towards Nashville, and turned into the Hickory Woods neighborhood just after crossing the Rutherford-Davidson County line. While continuing to flee, the driver took a turn too wide, hitting a brick mail box at a home on Sunnyvale Drive. That's when the driver gave up the chase and complied with all the officer's commands.

The 16-year-old from Nashville was evaluated at the hospital and released before being taken to the Rutherford County Juvenile Detention Center. The teenager told officers he did not stop because he didn't have a license. He also said that he had been told by the SRO at La Vergne High School to not return to the property and believed he meant the teen wasn't allowed to be in the city limits whatsoever.

The teen was driving his aunt's car during the chase. He claims he spoke with his aunt, who gave him permission to borrow the car for the night.

At this time, he is charged with felony evading, curfew violation, driving without a license and reckless driving.