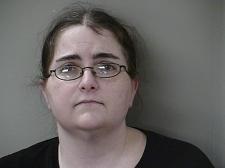 A LaVergne woman was arrested by police in Murfreesboro on theft charges after being accused of cutting security wrap off of multiple electronic items. 36 Year old Mary Ann Biggs allegedly swiped the tags out for lower costing merchandise. Loss Prevention workers at Walmart apparently caught Biggs at the store on Old Fort Parkway.

Biggs was transported to the local jail where she was placed under a $63,000 bond. She is scheduled to appear in court on March 9, 2017.