Local Actor Back On Stage After 15-Year Absence 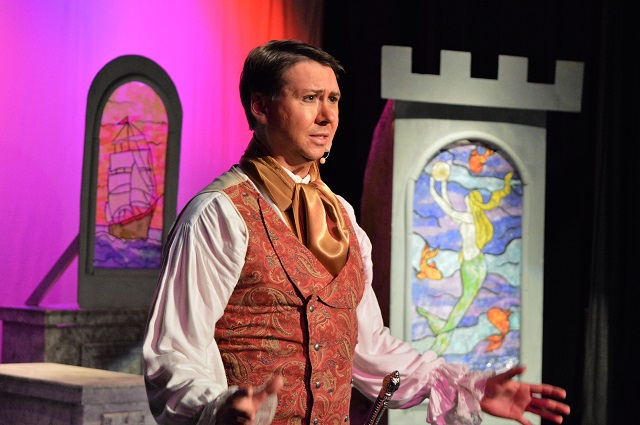 Lead actor in the Center's production of "Pirates of Penzance", Mark David Williams, returned to the stage on Friday night after a 15-year hiatus due to a tragic drunk-driving car crash.

Williams, who plays 21-year-old Frederic in "The Pirates of Penzance", was a classically trained singer and actor and had high hopes for a long-career in the music and theatre industry. His dreams were nearly ruined in 2001 when he was hit by a drunk driver.

"I was living in Nashville and was driving home late one night and I saw these headlights coming straight at me and I was hit straight on by a drunk driver," said Williams. He refers to this tragic event as a crash and not an accident. "Drunk driving is not an accident and in my affiliation with MADD we are very diligent to make that clear."

Mark was rushed to Vanderbilt University Medical Center where he had 5 major surgeries in 10 days. His jaws were wired shut for 3 weeks, and he suffered from broken bones and over 20 fractures all over his body and face. His face was too swollen to intubate, so he was given a tracheotomy and lost his voice. He spent 64 days in the hospital and months of physical therapy and rehabilitation followed. Losing the ability to sing and perform, possibly forever, was a devastating reality.

"I couldn't imagine my life without using my voice to perform," said Williams. "The severity of my injuries didn't leave me much hope that my voice would return to its original ability."

After the crash, Mark served as a music director at a church for many years. He directed choirs, and even stage shows where he and his family appeared in as well.

"As time went on, my voice started to come back and I was able to sing again," said Williams. "It was such a huge relief to me that I would be able to continue on my journey of performing."

Mark's children participate in Center Stage Academy, the children's program at Center for the Arts in Murfreesboro. Working behind the scenes at The Center gave him the "theatre bug" and inspired him to audition for his role in The Pirates of Penzance in June. Although he had not auditioned in years, Mark's voice was still amazingly strong and pitch perfect, and he landed the role easily.

"I love to sing, and I've been trained classically and have the type of 'chops' for this role, so it was just kind of calling me," said Williams about playing Frederic. "I had the time to do it and it's been a great blessing to be a part of this cast with the amazing singers and actors that we have."

Although his story is extraordinary, Mark gives this advice to those who have been out of theatre for a long time and are considering coming back: "Just to go for it. I've come to find it's a lot like riding a bike. You might be a little rusty at first but when you get back into it you really find and reignite that passion."

"The Pirates of Penzance" runs through August 27th at The Center for the Arts. Performances are Friday and Saturday evenings at 7:30, and 2:00 o'clock Sunday afternoon matinee. This is a family friendly show. General admission tickets are $15.00 for adults, $13.00 for seniors, students and military, and $11.00 for children. Groups of 10 or more receive a $2.00 discount per ticket. Tickets are available by visiting boroarts.org or calling The Center's box office at 615-904-2787. Center for the Arts is located at 110 W. College Street in Murfreesboro's historic business district.