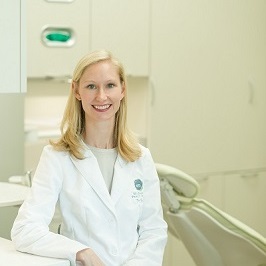 Poor oral health can affect every area of a person's life. Tooth loss and noticeable decay doesn't only affect your smile, it can also severely limit job and other personal opportunities.

"Practicing good oral health is important, not only for your physical well being, but also your mental health and confidence. Nothing represents you better than a smile," Jackson said.

To keep your pearly whites nice, Jackson recommended brushing your teeth last thing at night and on at least one other occasion with a fluoride toothpaste; cutting down on sugary foods and drinks; and visiting your dentist regularly, as often as they recommend.

One of Jackson's patients, Dean Heasley, said he tried not to smile when he was going through a dental implant process on a front tooth he lost to a baseball.

"Smiling was problematic, to say the least," said Heasley, who owns Nashville Marketing Systems. "Being in sales and having an issue with a visible tooth severely affected my attitude and confidence in a negative way. Once I got the implant procedure done, I noticed improvements in most areas of my life."

Heasley isn't the only Tennessean with oral health issues.

Tennessee ranks 47th in the nation for level of overall oral health and one in four adults ages 18-64 have lost six or more teeth due to dental disease, which is twice the national average.

According to a Community Health Needs Assessment conducted by Saint Thomas Health in 2013, dental health is the third most important health need in both Davidson and Rutherford counties.

Across the nation, more than 27 percent say they have oral health issues that they'd like to address. And one in four adults admit that they don't brush twice a day and more than a quarter only currently visit their dentist when they have a problem.

Dr. Elizabeth Jackson has been practicing dentistry since 2007. She was in private practice in Alabama until 2012 when her family relocated to Murfreesboro. Before opening her private practice in Murfreesboro, she served as the clinical director at Interfaith Dental Clinic - a nonprofit organization that provides essential dental care to at-risk individuals and families of our community.

Ever since the age of 8, Jackson knew that she wanted to be a dentist. After receiving her undergraduate degree in biomedical science with a minor in Spanish from Auburn University, she completed dental school at the University of Alabama at Birmingham.

The annual celebration of your pearly whites began in the United Kingdom in 1977. Over the past 40 years, National Smile Month crossed the ocean to the United States to become the largest and longest campaign to promote good oral health.

The month-long campaign ultimately hopes to raise awareness of important health issues, making a positive difference to the oral health of millions of people.