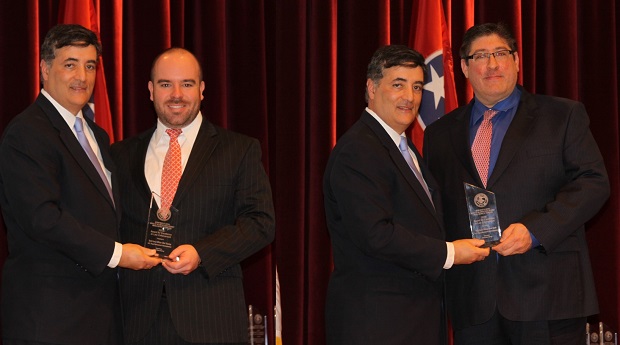 U.S. Attorney David Rivera recognized former Detective Clint Teasley and Detective Kevin Krieb of the Smyrna Police Department for their work on the case that started in 2012. Both Teasley and Krieb served on the Drug Enforcement Administration's Task Force at the time. Teasley now works in the private sector.

"Agents eventually learned that an individual named Donald Duane Buchanan Jr. was supplying thousands of opioid pills to numerous redistributors in Davidson and Rutherford counties," the U.S. Attorney's Office reported. "The DEA was able to discover that he was being supplied by sources in and around Detroit, Mich. The DEA also learned the primary source of supply was a man named Benjamin Bradley."

Bradley, who worked at a Detroit hospital, bought pills from a large network of people and directed sellers to drop off the pills at a house. He paid people to count and organize the pills and place the pills and transport the pills to Middle Tennessee. The pills were in sealed candy boxes.

Boxes of pills were transported to Cincinnati to Buchanan or his associates to exchange the pills for money.

"The investigation eventually revealed that Bradley and Buchanan had trafficked tens of thousands of prescription opiates into the district over the course of many years," the U.S. Attorney's Office reported.