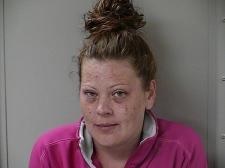 A Readyville woman was arrested and charged for the fourth time with DUI.

Andria Lynn Pierce was allegedly involved in a motor vehicle accident on Chaffin Place Sunday evening (10/9/16). When Murfreesboro Police responded to the scene, they found Ms. Pierce nearby. Pierce evidently admitted to officers that her license was revoked. She also told police that she smoked marijuana two hours prior to having an accident.

After the 35 year old woman performed a field sobriety test, police placed her in handcuffs for DUI number four. She later refused a blood alcohol content test, so a warrant for her blood was obtained.

Pierce was also charged for the fourth time with Driving on a Revoked License.