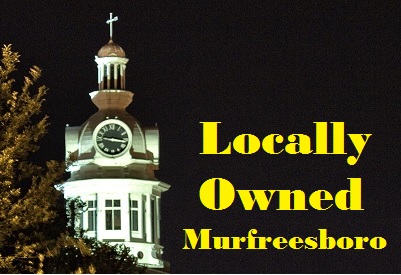 Locally Owned Murfreesboro officially launches with a membership drive and mixer from 5:00 to 7:00 o'clock Monday evening, November 14th at The Alley on Main (223 W. Main St.). As you hear WGNS continuously promoting for the past 70-years, "Shopping with locally owned businesses keeps dollars working to build a better comunity."

Studies show that for every $100 spent with locally owned businesses, $70 to $80 stays in the community. If it's at a national chain, approximately $40 stays. That money helps to pay salaries for your neighbors, helps to fund better schools, build parks and greenways, make road improvements, create better police and fire protection and more.

The Locally Owned Murfreesboro executive board and charter members will be on hand as the newly formed nonprofit introduces its vision to the Murfreesboro community.

An affiliate of the American Independent Business Alliance, Locally Owned Murfreesboro was formed in March, 2015 after local business owner Bilbro and downtown resident Leslie Russell Yost attended an event in Nashville where a representative from the AMIBA spoke about the national organization.

From there they recruited charter members and developed a mission.

"To put it simply, LOM was formed because Murfreesboro matters," Bilbro said.

Event is free and open to all business owners in Murfreesboro. It will be a casual mixer so that board and charter members can discuss our mission with other business owners. Appetizers will be served and a cash bar will be available. RSVP by Friday, November 11th at facebook.com/events/1765924470326127.

That's how Locally Owned Murfreesboro became an organization of independent local business owners dedicated to promoting the benefits of supporting locally owned businesses to the community and building a stronger local economy by joining together.

"By supporting these businesses you are helping to create a unique, one of a kind community that cannot be replicated anywhere else," Bilbro said. "Support your neighbors, family and friends by using their services, shopping in their stores and sharing them with everyone you know."

LOM's three main focus areas are collective marketing, providing a voice to represent local businesses to the government and media, and networking and referrals.