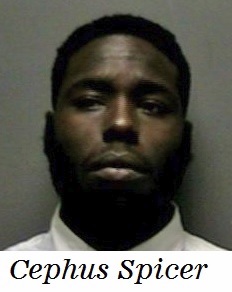 Convicted Murfreesboro robber Cephus D. Spicer has filed an appeal to his conviction in Rutherford County.

Spicer was convicted of aggravated robbery, conspiracy to commit aggravated robbery, and unlawful possession of a firearm on the MTSU campus in 2014. The man claims that his due process rights were violated by the State's reading of the indictment to the jury without proper instructions in 2014. He also suggested that the prosecutor's closing argument was improper.

Looking back to what landed Spicer behind bars, he and a friend robbed a female MTSU student who was walking to her dorm at night in 2013. After the student was robbed, she ran to a nearby building and called MTSU Police. Spicer and an accomplice were later arrested.

In 2014 the case went to trial. Spicer was found guilty by a jury and was then sentenced to 10 years in prison.

On Tuesday, November 1, 2016, the Court of Criminal Appeals of Tennessee denied the case from moving forward again. Therefore, 23 year old Spicer will remain behind bars until his sentence ends in year 2022. At that time he will be 29-years old. However, he will be eligible for parole in year 2020.

More details on the case:

In admitting to the robbery, Spicer wrote in a statement to police:

"Sept. 19th we approached campus around 2:30 a.m. to meet up with some female friends when we decided to rob over something valuable. So we started following a female with a iPad and headphones in her ear when we approached her she was stunned and shocked so she began to place her phone and iPad down and we fled the scene back towards the baseball field where we sat an[d] waited then decided to make a move back home when we were approached by officers. I was not the one who initiated the weapon being involved nor did I make any threats to the female and we were not pointing or aiming the gun and it was not loaded. I do take full responsibility of my actions. We had conversations about returning her items but did not know what approach to come with. I am sincerely sorry for my actions and am willing to work things out in a decent manner."