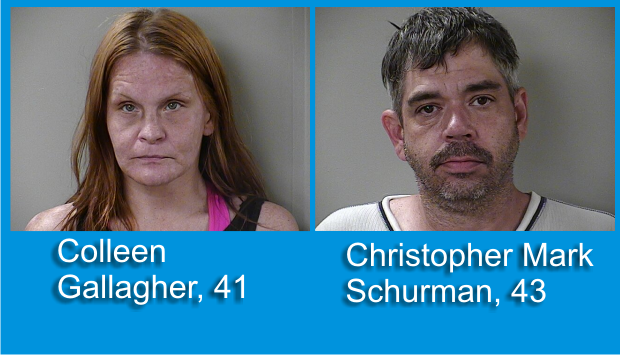 Tips from citizens and an investigation led to Monday's arrest of a suspect caught on camera allegedly stealing a trailer from a Walter Hill home, a Rutherford County Sheriff's detective said.

Suspect Christopher Mark Schurman, 43, of Nashville was accused of stealing about $10,000 worth of trailers and breaking into houses, said Detective Steve Craig, who investigated with Detective Jason Dowdle.

They charged Schurman with aggravated burglary, three counts of theft over $1,000, criminal trespassing, possession of burglary tools and possession of drug paraphernalia.

"He was absolutely terrorizing Metro Nashville and Rutherford County with thefts," Craig said. "We thank the public for their help."

Videotape showed a man later identified as Schurman hooking up a utility trailer to his truck at a Walter Hill home last month and driving away, Dowdle said.

Craig said the suspect allegedly broke into a home June 6 and stole a utility trailer June 8 on Lone Oak Drive.

"We were able to perform an undercover operation where we arrested him and a woman with him Monday off Sulphur Springs Road in Leanna," Craig said. "Patrol helped in the takedown."

Companion Colleen Gallagher, 41, of Manchester, was charged with possession of a Schedule IV drug and possession of drug paraphernalia.

Detective Capt. David Hailey commended the detectives for their efforts.

"Through a thorough investigation and following up leads, Detectives Dowdle and Craig developed a suspect with the help of other agencies and were able to locate an individual in the act of selling stolen property," Hailey said.

Both Schurman and Gallagher are being held in Rutherford County Adult Detention Center. A hearing is set Aug. 9 in General Sessions Court. Schurman is also being held for Metro Nashville Police.