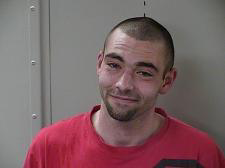 Murfreesboro Police recovered a 9mm handgun that was reported as stolen in Smyrna. The recovery of the gun took place on Sunday morning after an alleged domestic violence situation unfolded in nearby Coffee County.

26 Year old Russell W. Stover II is accused of threatening his step mother with the handgun in Coffee County and then driving to a friend's home in Murfreesboro. Police got a call that Stover was at the house in question where he was found to be asleep on the couch.

Murfreesboro Police questioned Stover about the aggravated domestic situation that was reported in Coffee County and he denied knowing about it, according to an arrest report. He then made statements about how he would "Show his stepmother what an aggravated domestic assault is." The police report also showed that he said, "When he got out of jail he would face her and punch her teeth out."

Stover was charged with Aggravated Domestic Assault. Stover was booked into the Rutherford County Adult Detention Center and later transferred to Coffee County where the charges originated from.

As for the gun, it was returned to the rightful owner in Smyrna.