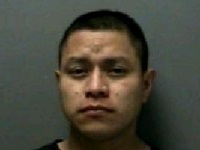 DUI number four is what one 28-year old Murfreesboro man was charged with after he was pulled over on Memorial Boulevard. Carlos A. Lobos was stopped for “failing to maintain a lane of travel” Thursday. Police say he even stopped one full car length past the white stop bar at an intersection, prior to them pulling him over.

Due to a language barrier, all of the Field Sobriety Test could not be administered after Lobos got out of his car. To make matters worse, it took police a little while to determine the suspect’s true identity. Apparently when he was first questioned, he told officers his name was “Nery Hernandez.” Police figured out that was a lie when they found his wallet that contained a picture ID from Guatemala. That was when Lobos confessed to being “Lobos” and that was also when officers hit Lobos with the charge of “Criminal Impersonation.”

After checking the culprits driving record, it was determined that he had been convicted three times before in Rutherford County for DUI. He also received two convictions for driving on a revoked license in the past.

Lobos was charged with the following offenses:

The Lynch Drive man is not being released from jail at this point. A “HOLD” has been placed on him at this time. His court date will be announced in the future.