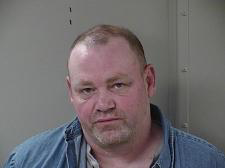 An Arrington man has been charged with DUI number 7.

49 Year old Jeffrey Todd Oakes was pulled over after a Murfreesboro Police Officer was flagged down by the employee of a restaurant near the Stones River Mall. Evidently, the restaurant employee told the officer that Oakes tried to leave several times, but was told he was too intoxicated to drive. Police then observed the subject "stumble into a white vehicle and drive," according to a police report.

A traffic stop was quickly pursued within a matter of feet of the restaurant. Oakes was said to have bloodshot eyes, unsteady on his feet and had an odor of intoxicant. The police report further stated, "Mr. Oakes also stated he had taken Xanax, Hydrocodone and consumed alcohol prior to driving."

After being arrested, Oakes refused to allow for a blood sample. A search warrant was then obtained for Oakes' blood to be drawn and tested for alcohol content levels.

The Arrington man was charged with DUI number 7, Driving on a Revoked License, Violation of the Open Container Law and Violation of Implied Consent. He will appear in a Rutherford County Courtroom on August 3, 2016.

Oakes is currently free on bond.