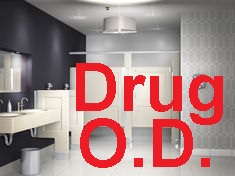 (MURFREESBORO) Murfreesboro Police are investigating the death of a 34-year old male found in a bathroom stall in a Rutherford Boulevard gas station.

Although it is believed to be a drug overdose case, Detective Sergeant Lawson and Detective Boisseau are conducting an investigation to determine the cause of death.

Officials told NewsRadio WGNS that one of the service station employees made his scheduled visit to clean the rest rooms and take out the trash. When he entered, the motion sensor light came-on and he could see a man's feet in the stall. He knocked on the door, but there was no response. Upon looking over the door, it was noticed that the male's skin had turned purple. 911 was immediately called.

WGNS has decided not to release additional information, as it would serve no purpose in identifying the victim, employee or gas station. This story is to show that drug overdose can happen to any age and in all parts of town.

With this area being impacted by opioid problems, the Centers for Disease Control and Prevention gives ways to identify persons who are on drugs:

If you find someone with these symptoms, call 911 immediately and stay with the person until emergency responders arrive.