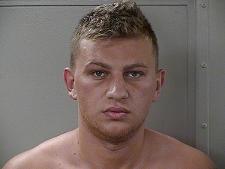 Five counts of "Criminal Simulation" were levied against a Nashville man during his recent trip to First Bank in Murfreesboro.

28 Year old Kovacs Istvan allegedly visited the bank on Memorial Boulevard where he was said to be using fraudulent ATM / Credit cards to withdraw money from the banks ATM machine.

When police pulled up, they spotted Istvan sitting in a grey Hyundai SUV. Police flipped on their blue lights and then got out to speak with Istvan.

A police report shows that the man provided officers with a Hungarian Passport, which is when the patrol officer called for a detective. Police also ran a search on the tag that was being displayed on the SUV, which came back as being stolen out of Nashville. Needless to say, the Hyundai was towed to the Murfreesboro Police Department for safe keeping.

Once at the local jail, Istvan allegedly said that he would hang himself if placed into a holding cell. After the suicide statement was vocalized, police transported him to Saint Thomas Rutherford Hospital to be evaluated. Once cleared, he was transported back to the local jail and charged with not only five counts of criminal simulation, but also five counts of identity theft, theft and unlawful use of plates (vehicle tags).

The subject remains in custody at this time.