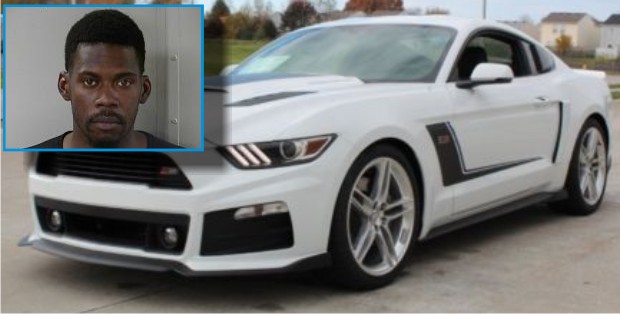 UPDATE: A La Vergne man has been arrested after being accused of stealing a car from Ford of Murfreesboro.

Evidently, the salesman was showing the car to 29 year old Michael Deandre Owens on Tuesday afternoon when Owens allegedly drove off in the new Ford Mustang. But, it wasn't just any Mustang. It was a 2016 Ford Mustang GT Roush Stage 3 model with well over 400 horsepower. That... was evidently a little too much power for Owens who eventually stopped and jumped out of the car shortly after leaving the dealer. The car then rolled into a ditch.

A Sheriff's Deputy who spotted the car says and that by the time he turned around, Owens had left the car in the middle of Jefferson Pike and fled.

Deputy Michael Rogers reported that Owens jumped out of the car and ran into a nearby wooded area. The car then rolled into a ditch. Luckily, the deputy was able to catch Owens.

Once the suspect was placed into a patrol car, he complained of feeling sick. Owens was transported to the hospital, which is where Murfreesboro Police caught up to him and transported Owens to the jail after he was medically cleared.

Owens was charged with theft over $60,000 once he was captured. He was also served warrants out of Jackson, Tennessee and Olive Branch, Mississippi. The Lyndhurst Place resident (La Vergne, TN) will also be charged with being a fugitive from Justice.

Owens is being held without bond in the Rutherford County Adult Detention Center. He will be due in court on September 21,2016.