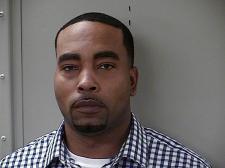 A Christiana, TN man was charged with the manufacturing or the delivery / sale of a schedule six drug after being pulled over by Murfreesboro Police. Evidently, Tyran D. Turrentine was caught doing 84 miles per hour in a 70 mile per hour zone on Interstate 24 at Medical Center Parkway.

During the traffic stop, one of two police officers noted that the smell of marijuana was coming from the vehicle. The officer asked Turrentine if he had a reason to smell marijuana and the 39 year old told the officer that he shouldn't smell the green leafy plant.

Despite the suspect suggesting the smell should not be present, police conducted a probable cause search of the Hyundai. Probable cause is a reasonable belief that a person has committed or will commit a crime. For probable cause to exist, a police officer must have sufficient knowledge of facts to warrant a belief that a suspect is committing a crime. The belief must be based on factual evidence, not just on suspicion. In this case, the evidence was simply the odor of marijuana.

Inside the car, officers say they located a digital scale, two glass jars with marijuana residue on them, two pill bottles containing an unknown substance, a second glass jar filled with a large bag of marijuana, a box of sandwich bags and a second digital scale.

After the car was searched, police turned their gaze towards Turrentine. The arrest report shows that he had two cell phones with him, but no explanation as to why he had two phones. He also had $582 in cash, which was later seized by an MPD detective.

As for the unknown substance in the two pill bottles, it was sent to the TBI crime lab to be tested. A search warrant was also applied for so that police can look into the text messages on the two phones that may outline more detail into Turrentine's daily habits and where he may have purchased the marijuana.