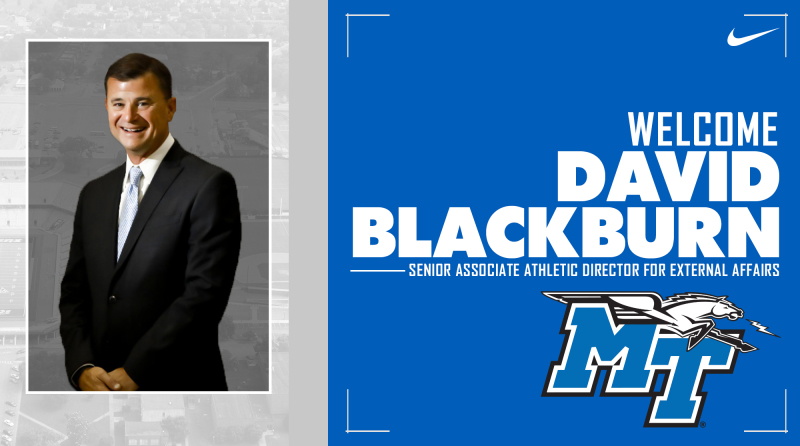 "It was an easy decision to hire a person the caliber of David Blackburn," said Massaro. "We lost a great talent in Whit Turnbow but we feel like we have replaced the position with a person who brings a tremendous skill set. Personally, I look forward to having someone in the department who has sat in the Athletic Director's chair because as we continue to grow that experience will be invaluable to me and our department.

"David has a background in fundraising, which is always a big need for our department, and his external skills are off the chart. He will be a perfect fit for us and I can't wait for him to get started."

Blackburn, who spent the previous year as a consultant, served the prior four years as Vice Chancellor and Director of Athletics at Chattanooga where the Mocs had unprecedented success in academics, athletics and fundraising.

The Mocs won 13 Southern Conference regular-season titles and 10 conference tournaments under Blackburn while setting fundraising benchmarks for three straight years and annually increasing the athletic fund. In 2015-16 during a budget reduction, the UTC Athletic Department managed a $1 million surplus under Blackburn to surpass the previous year of $650,000. He also launched a $16 million capital project for facilities.

The Chattanooga community also took note of what was happening at UTC. The Mocs led the SoCon in attendance in football, men's basketball, women's basketball and wrestling each of the last two seasons. The Southern Scuffle has also grown into the top in-season wrestling tournament in the nation, while softball continues to enjoy a strong following.

In the January 2017 edition of Southern Pigskin, Blackburn was rated one of the Top 5 Most Powerful Game Changers for 2016. He also served as President of the State of Tennessee Sports Hall of Fame from 2016 until 2018 and is a current member of the National Football Foundation.

"It's a wonderful opportunity that presented itself and I am thrilled to be joining the Middle Tennessee staff," said Blackburn. "Hopefully, together, we can continue to advance Blue Raider athletics. I am also extremely grateful to Dr. (Sidney) McPhee and Chris (Massaro) for allowing me to join their team and be a part of this growing community."

Hired at Chattanooga on April 20, 2013, Blackburn quickly instilled a new mission that focused on equipping the entire athletics department for success, while accompanying a vision of achieving excellence.

UTC saw continued excellence in the football program with its third-straight SoCon title in 2015. UTC advanced to the FCS Playoffs for the second time, while the men's basketball team was back in the NCAA Tournament for the first time since 2009. Volleyball had its best season in nearly two decades, while women's basketball and wrestling continued to dominate the league.

Blackburn also turned heads with his impressive head coaching hires. When he took over in 2013, he had the unique situation of filling vacancies in both men's and women's basketball. By all accounts, he nailed each hire with Will Wade and Jim Foster.

Foster won four straight SoCon titles and had the women's program ranked in the top 25 in each of his first three seasons. Wade turned around the men's team and parlayed that into the head coaching position at VCU.

Blackburn quickly snagged Florida assistant Matt McCall who was the SoCon Coach of the Year in 2016, leading UTC to 29 wins in this first season. He also hired Tom Arth to lead the Mocs football program.

In the classroom, UTC student-athletes set a school record for semester grade-point-average with a 3.113 in the fall of 2015. Overall, student-athletes at UTC posted a 3.0 or higher for seven straight terms after hitting the mark for the first time in spring of 2014. UTC had record numbers of student-athletes on the Academic All-SoCon teams in 2015 and 2016.

All of this success came as no surprise, based on the experiences and expertise Blackburn brought to the position. He spent the previous two decades in a number of administrative roles at the University of Tennessee. He most recently served as the Senior Associate Athletics Director for Administration where he was member of the Volunteers' executive staff from 2009 until 2013.

At Tennessee, Blackburn was the sport administrator for football, was the primary fundraiser for capital projects, including oversight in the construction of a cutting-edge $46 million football training center, and negotiated and scheduled all football games.

A native of Loudon, Tenn., Blackburn is married to the former Andrea Radel of Albion, Mich. They have two daughters, Emma, who is currently a senior at UTC, and Charlee (9). Blackburn is a 1990 graduate of Tennessee with a Bachelor of Science in Education.