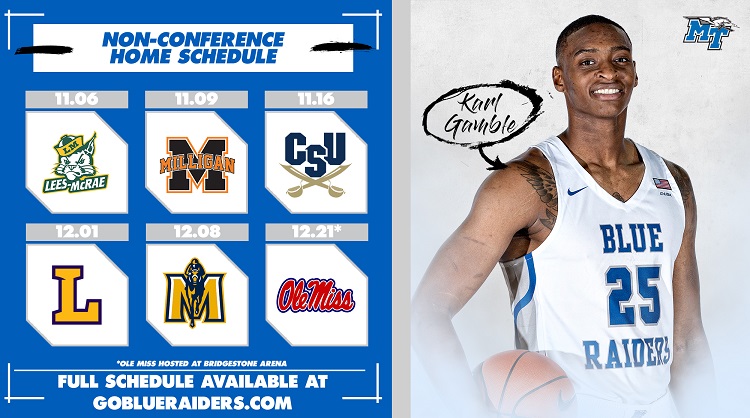 Featuring a match-up against Ole Miss at Bridgestone Arena and a Thanksgiving trip to the Bahamas for the Battle 4 Atlantis, Middle Tennessee will host five games in the Murphy Center and face four true road tests.

Of the four true road contests, two will take place in Nashville at Belmont and Vanderbilt, giving Middle Tennessee fans eight opportunities to cheer on the Blue Raiders in the midstate.

"It's great that we have eight games in Murfreesboro or Nashville," Director of Athletics Chris Massaro said. "It's always important for us to reach our alumni all over the midstate and this schedule gives them ample opportunities to watch us in a variety of venues."

The Blue Raiders open the season with back-to-back home contests against Lees-McRae on Nov. 6 and Milligan on Nov. 9. The opener will tip at 6:30 p.m. while MT's Friday contest against Milligan will serve as the annual Education Day game and will tip at 11:00 a.m.

The Blue Raiders stay close to home for their first road trip of the season, facing their first of three Nashville foes when they take on Belmont on Nov. 12 at Curb Event Center. MT then returns home to host Charleston Southern on Nov. 16 before departing for the Bahamas.

The Blue Raiders open up the Battle 4 Atlantis against last season's No. 1 overall seed in the NCAA Tournament, Virginia, on Nov. 21. MT will face either Butler or Dayton on Nov. 22 and finish out their stay on Paradise Island on Nov. 23 against Florida, Oklahoma, Stanford or Wisconsin.

Upon returning to the mainland, Middle Tennessee takes on its second Nashville foe of the year, this time as the home team. The Blue Raiders will host Lipscomb, the reigning Atlantic Sun Champions, on Dec. 1 as the teams meet for the first time since 2007 and just the second time in the last 27 seasons.

MT heads back up Interstate 24 on Dec. 5 to face Vanderbilt at Memorial Coliseum for the second season in a row, bringing a 3-point win back to Murfreesboro last season.

The Blue Raiders close out non-conference play with road trips to Toledo (Dec. 15) and Rhode Island (Dec. 30) sandwiched around the Dec. 21 match-up against Ole Miss at Bridgestone Arena in Nashville.

All in all, the 2018 non-conference schedule includes four NCAA Tournament teams already, but could end up totaling as many as six depending on who the Blue Raiders draw in the second and third rounds of the Battle 4 Atlantis.

"We are excited to continue the tradition of putting together strong non-conference schedules here at Middle Tennessee," McDevitt said. "It will be a challenging schedule that will put our team to the test week in and week out."

Middle Tennessee returns to Conference USA play on Jan. 3 with a home contest against FIU. The Raiders will also host Florida Atlantic, UTSA, UTEP, UAB, Charlotte and Old Dominion in league play with two more home contests in the flex portion of the C-USA schedule at the end of the regular season.

Season tickets go on sale on Sep. 10 and can be purchased by contacting the Blue Raider ticket office at (615) 898-5261, ordering online at GoBlueRaiders.com/Tickets or visiting the ticket office located in Gate 1A of Floyd Stadium.

"Having the Murphy Center full on game days is extremely important," McDevitt added. "Our players feed off energy from the crowd. When the arena is packed and our fans get involved in the game the players feel that energy, so the Murphy Center being our sixth man will be important all year long."

Fans looking to purchase tickets or travel packages for the Battle 4 Atlantis can visit AtlantisBahamas.com/b4a or call the box office at (242) 363-6601.