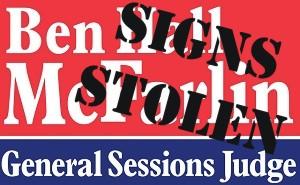 Judge Ben Hall McFarlin says as many as 20 of his campaign signs along East Main Street have been stolen. He says a report has been filed with Murfreesboro Police and he's even offering a one-thousand dollar reward to anyone who provides information that leads to an arrest and conviction for the crime. On his campaign Facebook page, McFarlin says it is "most disconcerting to see the election process soiled in this matter, and even more so the violation of property rights of those who had agreed to allow (him) to display a sign." The signs, he says, are valued at around $500, not counting the time it took to put up the signs.