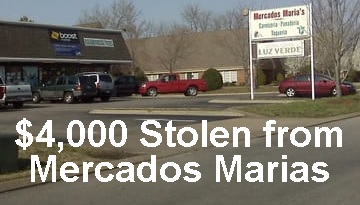 The most recent was at 2:20AM this past Friday morning at the Mercados Marias Grocery at 264 Heritage Park Drive. Surveillance video showed an unknown subject using a crowbar to break open the side door.

CLICK TO SEE surveillance video of the burglars in action.

The time stamp on the video shows the break-in occurred at 2:20 early this past Friday morning. Cameras also showed the suspect using the crowbar to open the cash registers and it was estimated that approximately $4,000 was taken. The subject was only in the business for 10-minutes, and he fled on foot.

Murfreesboro Police Public Information Officer Larry Flowers reports that the culprit was a light skinned male and was wearing a blue hoodie with a black mask, gloves, black pants and gray sneakers. He was carrying two yellow crowbars.

Phone your tip to CrimeStoppers, and if it leads to an arrest and conviction--you could be eligible for a cash reward of up to $1,000. Plus, you remain anonymous--not even the police know who you are. Phone CrimeStoppers at 615-893-STOP (7867).