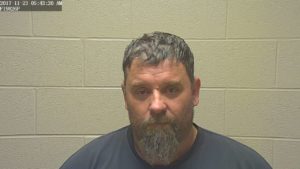 On Thanksgiving night, Jeffery Neal Foster age 46 of Woodbury was stopped for a traffic violation by Coffee County Deputy Blake Simmons on Interstate Drive in Manchester.

When the deputy walked up to the vehicle he says he saw a long firearm in the back seat.

According to the arrest warrant, Simmons says that Foster was acting very nervous while he was checking the man's driver's license. The warrant goes onto say the deputy asked Foster if he had been drinking and the man said no but allegedly said he had smoked some marijuana earlier. Deputy Simmons asked if there was anything illegal in the vehicle and Foster allegedly said no.

The deputy asked if he could search the vehicle and according to the warrant Foster said yes. When the officer was searching the man's person for safety reasons he allegedly found in the man's left front pocket approximately 62 grams of meth. The officer also found 3 grams of marijuana, several baggies, a set of scales and a glass pipe. Also, allegedly located was a rifle and a handgun.

Foster was booked in at the Coffee County Jail under charges of manufacturing/delivering/selling/possession of a controlled substance, schedule VI drug violation, unlawful drug paraphernalia uses and activities and illegal possession of a weapon. He was later released on a bond of $16,000. Foster is to appear in Coffee County Court Feb. 12, 2018.