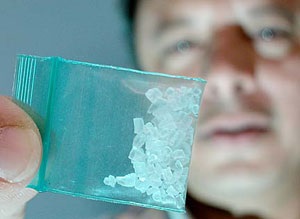 7.2 Grams of meth were recovered in a Murfreesboro traffic stop. Police pulled over Nathan Torres after he reportedly ran two stop signs. Once stopped, it was realized that he was not supposed to be driving due to a suspended license from a past DUI case. However, Torres was not the one arrested for the meth.

Officers spoke with Torres and passenger Michael Manor during the stop and gained consent to search the vehicle. Inside, police found a black box under the drivers seat that was said to contain over 7 grams of meth wrapped in individual packages. Officers also found a small amount of marijuana in the box along with a glass pipe, syringes, and a cut straw. Manor, who was the passenger in the car, claimed ownership of the drugs and was charged with the manufacturing or sale of a schedule two drug and the manufacturing or sale of a schedule six drug. The 26 year old was also charged with possession of drug paraphernalia.

During an interview with a detective, Manor admitted to selling meth prior to police making contact with him. He then allowed police to search his cell phone. Police say they observed several text messages in regards to drug deals.

Manor was booked in the local jail under a $9,000 bond. He will appear in court on April 21, 2016. Torres was not arrested and only issued a citation for driving on a suspended license.