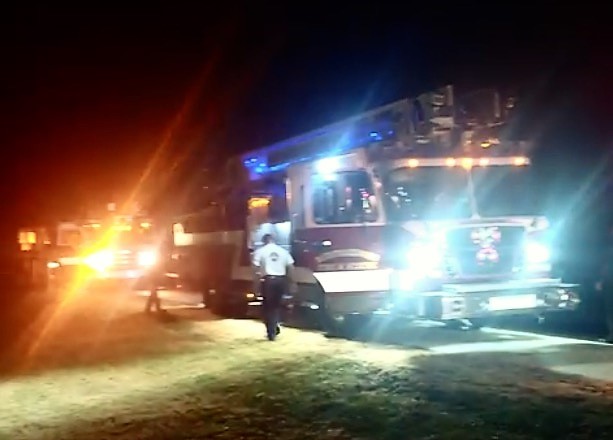 Crews from the Murfreesboro Fire and Rescue Department rolled-out around 8:30 Monday night (11/28/2016) to help those who are loosing everying in East Tennessee's fires in the Sevier County area of the Smoky Mountains.

Murfreesboro Fire and Rescue's Chief Mark Foulks deployed fourteen firefighters, a fire engine and two ladder trucks to the staging area located in Sevierville to assist with the uncontained fires that are spreading across Gatlinburg. The personnel and fire equipment arrived at 1:30 Tuesday morning (Central Time) and have now been requested by operations to respond into the scene of the fires.

Engine 1, Ladder 8, and Ladder 9 are currently assisting with the catastrophic loss of numerous residential and commercial structure fires that are continuing. It is unlikely that additional crews will respond, but instead, personnel will be rotating out over the next 48 hours and personnel will replace those who initially responded.

The request came from the Tennessee Fire Chiefs Mutual Aid System which is a network of fire departments throughout the state.

Tennessee Emergency Management Agency reports that three deaths have been attributed to the blaze and that over 150 structures have burned in the area, including homes, businesses, schools, apartment complexes and a 16-story hotel.

According to National Parks spokesperson Dana Soehn, the flames were spread by 70 mile per hour winds and were so unpredictable that the entire area was under a mandatory evacuation.

In fact, the Gatlinburg City Hall had been the original command post, but it too had to be evacuated as fires moved quickly in that direction. The fate of that structure is not known, nor is the popular "arts trail" between the city hall and Dollywood.

The American Eagle Foundation is in the process of evacuating its birds from their massive facility in Piegon Forge. The group is also keeping a close eye on the eagles at Dollywood. Reports indicate they are safe at this time, but the air quality is not optimal.

National Park rangers are anxious to get back into the area to check on the over 10,000 animals that habitat the most popular national park.

Governor Haslam deployed the Tennessee National Guard, and they are in the area to clear the roads and help maintain order.

Residents in the area are being asked to stay off of their phones, as the lines need to be free for emergency communications. Several injuries are being treated, but no deaths have been reported.