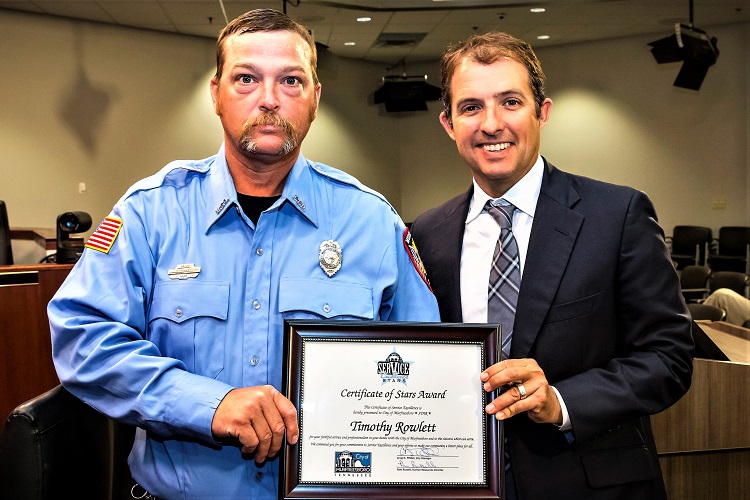 On Sunday, July 21, 2019, Rowlett, who was off-duty, responded to a fire with his personal vehicle to assist with firefighting and the transport of an injured County firefighter. Rowlett has served the city and the Fire Rescue Department since November 1995. He was first hired as a Firefighter before being promoted to Driver/Engineer in December 2006.

"I am nominating Tim Rowlett for the STARS award for actions taken on July 21, 2019 to support crews at a county fire scene on Brown's Chapel Road. The county was working a structure fire that was fully involved with fire. Due to the terrain, lack of access, and heat, resources were being taxed. The county requested mutual aid from the city to help with extinguishment. I responded in the battalion chief car along with Engine 5 to help. Upon arrival, it was evident that the lack of access was creating an uphill battle for responders. Tim was off-duty and lived just down the road from the fire scene. He used his four-wheeler to move water and personnel up to the front of the line. Tim also made it possible to move an injured firefighter from the hot zone to an ambulance 2,500 feet away. If not for him, care for the injured would have been delayed. As the scene came to a close, Tim used his truck and trailer to haul the county's fire hose to a safe location so that they could reload it. His actions to support the county with county fire ground operations exemplify the character that we desire for all of our employees."

The STARS Service Excellence program is intended to recognize outstanding employees who embody the city's standards for service excellence and exemplify the city's core service values. The purpose of the STARS award is to recognize and reward those employees who go above and beyond their normal job duties in providing outstanding customer service to internal and external customers.

Congratulations to Tim Rowlett for being named recipient of the STARS Award for Outstanding Performance.