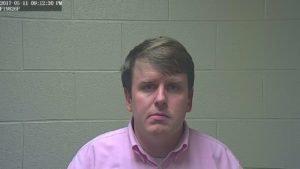 In nearby Coffee County, Tennessee, former Tullahoma High School co-band director Martin McFarlane is free on a $30,000 bond after his arrest by the FBI. The 31 year old will be monitored by a monitoring device.

The indictments allege that McFarlane transported the internet pornography of "minors engaging in sexually explicit conduct." He is also accused in the federal indictments of "knowingly possessing child pornography" that had been "mailed and shipped and transported" by computer.

According to the federal court documents, McFarlane faces a maximum of 10 years in federal prison and a fine up to $250,000 if convicted. He cannot possess any type of computer while awaiting a trial.

Court documents show that all motions in the case are to be filed no later than Oct. 3. If a plea bargain is reached on the charges, it will be heard on Oct. 17th. If not, then a final pretrial Status conference will be held on Oct. 23 at 3 p.m. EST. If no agreement is reached then a trial will be held in U.S. District Court in Chattanooga on Oct. 31. At 9 a.m.

If he is convicted of the charges, McFarlane will be required to forfeit two cell phones, computer, a laptop and a tablet.

The FBI along with the Tullahoma Police conducted a search of his residence on Castle Walk on May 11 in search of the pornography. While conducting that search they allegedly found marijuana and drug paraphernalia. He appeared in Coffee County General Sessions Court on the drug charges and was given a suspended 11 months 29-day sentence, a $250 fine, court cost and report to the Coffee County Probation office. He resigned from his job at the school.