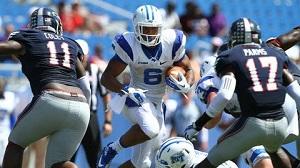 A home schedule that sees the return of a long-time rival, two regional conference attractions and a national power highlight the 2014 Middle Tennessee football schedule as announced by Director of Athletics Chris Massaro.

Middle Tennessee is coming off its second straight eight-win season and an appearance in the Bell Helicopter Armed Forces Bowl.

"I think we have a very attractive home schedule with Western Kentucky, Southern Miss and UAB all in a row to get things started in league play," said Massaro. "Then you bring in a nationally recognized program like BYU and close the year with a very strong FAU team and I think you have something our fans will be excited about."

The Conference USA television package will be determined in the spring and there is a chance one or two games could move. Conference USA's national television partners are Fox Sports Media Group and CBS Sports Network for regular season games. The league's 10th annual Championship Game, pitting the champions of the East and West Divisions, is scheduled for Saturday, December 6 and will be televised by ESPN or ESPN 2.

The season will get underway on Saturday August 30 at home against Savannah State. The Blue Raiders and Tigers have not played since 1983.

The Blue Raiders will then hit the road to face Big Ten foe Minnesota in Minneapolis. This will mark the second meeting between the two programs in football after the Golden Gophers defeated the Raiders in Murfreesboro to start the 2010 season.

After a year off, longtime rival WKU returns to the Middle Tennessee schedule after the Hilltoppers moved from the Sun Belt Conference. The Blue Raiders and WKU have met 63 times in football with MT winning four of the last five contests.

An in-state battle with Memphis on September 20 will see the Blue Raiders at Liberty Bowl Memorial Stadium in Memphis. MT has won five of the last six against the Tigers, including three in a row.

Middle Tennessee will remain on the road as they head east to face Old Dominion. It will mark the first-ever meeting in football between the two schools and will be the Monarch's C-USA home opener.

The Blue Raiders will return to Floyd Stadium on Oct. 4 to host Southern Miss. The Blue Raiders are 2-0 all-time against the Golden Eagles who will be making their first visit to Murfreesboro.

Next up will be a trip to Huntington, WV as the Blue Raiders will tangle with Marshall. The Raiders defeated the Herd last season, 51-49, on the game's final play. MT will be playing at Marshall for the first time since 1994.

Middle Tennessee will host UAB on October 18 for the Blazers' first visit to Floyd Stadium since 1995. The Blue Raiders defeated the Blazers last year at Legion Field on a Cody Clark field goal with three seconds to play.

Following an open date, the Blue Raiders will host BYU on Nov. 1 as the Cougars come to Murfreesboro for the first time in history. BYU defeated MT last season in Provo.

After their second open date of the season, the Blue Raiders will head to Miami, FL, to take on FIU. The Blue Raiders own a 6-3 all-time record against the Panthers, including last year's 48-0 win in Murfreesboro.

Florida Atlantic will come to Murfreesboro on November 22 for the home finale. The Blue Raiders and Owls had a thrilling overtime contest last season with MT squeezing out a 42-35 win.

The Blue Raiders will conclude the regular season on Nov. 29 at UTEP. MT will be making its first visit to El Paso.

"We play in a great league and our non-conference schedule is challenging as always," said Head Coach Rick Stockstill. "We have 12 opportunities that our players and coaches are very excited about. We look forward to getting started and I can't wait to see all the Blue Raider fans packing Floyd Stadium in 2014."