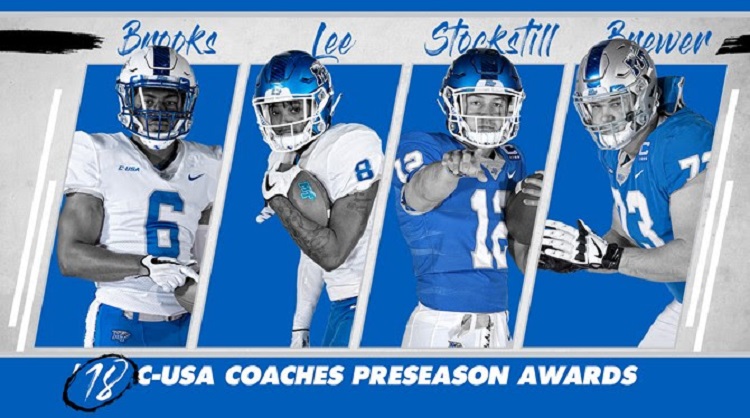 The "Voice of the Blue Raiders," Chip Walters, has more on the players selected, as announced Monday:

Quarterback Brent Stockstill, receiver Ty Lee, lineman Chandler Brewer and linebacker Khalil Brooks were selected to the preseason team, which is voted on by the 14 C-USA head coaches, who can't vote for players on their team.

Lee, a second team all-conference pick in 2017, had a league-leading 79 receptions for 955 yards and five touchdowns last season. The Moultrie, GA, native also had 109 yards rushing and is currently ranked fifth all-time at MT in receptions.

Brewer, out of Florence, AL, was a team captain last year while earning honorable mention all-league honors. He owns 36 career starts and has played 2,665 snaps.

Brooks is coming off a career year when he tallied 76 tackles to rank third on the team to go with 17.0 TFLs, 7.5 sacks, six hurries and a forced fumble. The Atlanta, GA, product earned second team all-conference honors.