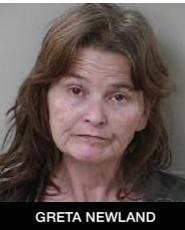 A Mt. Juliet woman was arrested by Murfreesboro Police on her fifth DUI offense. On Saturday, Murfreesboro Police report 50-year old Greta Newland of Cooks Lane in Mt. Juliet, was arrested after a welfare check at the Mapco on Northwest Broad. When officers arrived, they found the woman slumped over the wheel of her vehicle with an open container of whiskey next to her. After failing a field sobriety test, she was arrested. Newland also faces a charge of driving on a revoked license, fourth offense and having an open container of alcohol. She's was booked into the Rutherford County Adult Detention Center on a six-thousand dollar bond. Newland will answer to the charges in General Sessions Court on October 29th.