MT Junior Drafted in 5th Round by San Francisco Giants 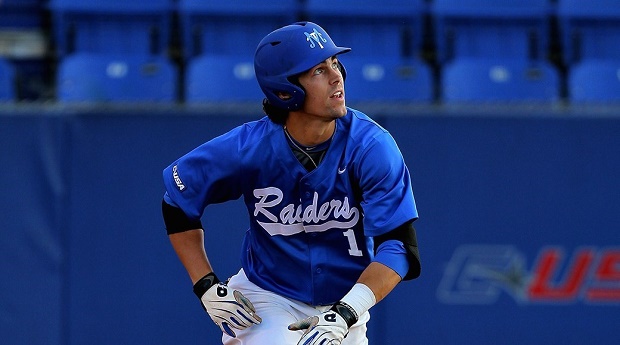 Ronnie Jebavy's dream has become a reality. The Middle Tennessee junior outfielder became the fifth-highest Blue Raider baseball player ever drafted when he was selected in the fifth round of the MLB First-Year Player Draft by the San Francisco Giants Tuesday...

Jebavy is also the first Blue Raider ever selected by the Giants. He's a former Riverdale baseball standout, who garnered all district and all region honors his senior season. Jebavy spent two years at Columbia State before becoming a Blue Raider. For more on the story, head to WGNSRadio.com, keyword Raider Draft.

"It was breathtaking; my heart was beating out of my chest," Jebavy said, shortly after being drafted. "It is a lifelong dream being put into play."

Jebavy said he will fly to San Francisco for a physical either Wednesday or Thursday. He indicated his plans are to sign with the Giants and forego his final year of eligibility at Middle Tennessee.

"I plan to fly out and take my physical and everything is good I expect to sign the papers and start playing short season and see what happens from there," Jebavy said. "This is such an honor and I'm very humbled. There are no words to explain what Jim McGuire has done for me and helped me to develop as a player. I was able to play for a great team and a great group of guys. I think God and the people who have supported me."

"This means a whole lot for Ronnie, his family and our program," Middle Tennessee Head Coach Jim McGuire said. "He is very, very deserving of (a high draft) with the year he had. People were thinking fourth-to-sixth round and he fell right into that spot.

"Ronnie is a tremendous student-athlete and he is the total package. I know it is a forgone conclusion that he will sign. He will be missed."

McGuire said he believes Jebavy has "big-league tools" and will have a chance to reach the Major Leagues.

"He's a player I believe can do well in professional baseball, stay in centerfield and reach the (Major Leagues)," McGuire said. "Obviously, the San Francisco Giants do as well based on taking him in the fifth round. There are not too many rounds before five as we have come to realize through the years."

Jebavy, whose brother Ryan Stephens played at Middle Tennessee and is the Colorado Rockies organization, was the Conference USA Newcomer of the Year after transferring from Columbia State. He was also a first-team All C-USA selection after leading the Blue Raiders in batting average (.359), on-base percentage (.407), hits (88) and stolen bases (24) as a junior. He led C-USA in hits and stolen bases were second in the league in batting average.

"It's one of the best single seasons of any of the all-time greats we have had," McGuire said. "Some of it goes unseen because of all of the defensive plays that he made and what he brought to the table defensively, and then the disruption he causes on the bases. Stats don't measure all of those things."

Jebavy was not drafted out of high school or junior college; however, he blossomed during his first year as a Blue Raider.

"The year I had may have surprised some people, including me," Jebavy said. "I'm just thrilled it's all over. I've tried not to think about the last few days but that's difficult. I'm honored to play for a program like MTSU where so many great players have played. I am proud of what MTSU has provided me."

Jebavy is the fifth Middle Tennessee baseball player to be drafted in McGuire's three years as head coach and also is the highest drafted player since Brentz was taken with the 36th overall pick of the Boston Red Sox in 2009.