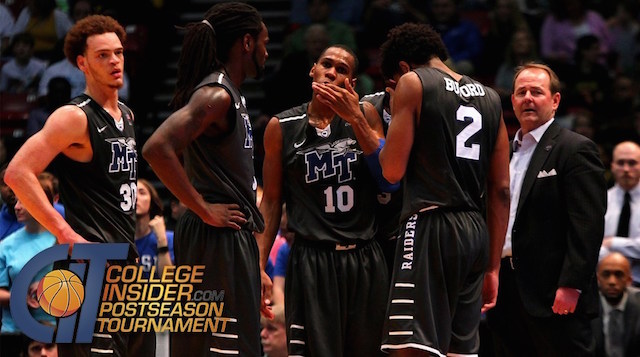 MT is on the hunt for its fourth-consecutive 20-win season with a current record of 19-16 heading into the tournament.

The Golden Flashes are 21-11 and fell to Akron in the MAC Championship in the quarterfinal. Kent State is ranked 94th in RPI.

This will be the first time these teams will meet in program history. MT and Kent State shared two common opponents this season with UTEP and Akron.

The teams that have won the CIT have found great success in building their program following their tournament run with Murray State winning the 2014 CIT and being on the NCAA Tournament bubble only one year later. Other past CIT Champions include Old Dominion (2009), Missouri State (2010), Santa Clara (2011), Mercer (2012) and East Carolina (2013).

Old Dominion was ranked in the top-25 in the country through-out the season this year, while Mercer beat Duke in the 2014 NCAA Tournament.

This is the Blue Raiders second ever appearance in the CIT as they fell to tournament champion Missouri State in 2010, 87-79.

Middle Tennessee is hosting the CIT for the first time in program history. Tickets are $10 for general admission and $4 for students. When purchasing online, fans should select the TicketFast option to print your tickets at home.

Beginning Monday, at 10 a.m. at the Blue Raider Ticket Office located Gate 1A the first 200 students with a valid MTSU Student ID will receive a voucher good for complimentary admission to the game. Students that do receive the voucher will need to bring their voucher and MTSU Student ID to the game to get in.

*Any postseason games at Middle Tennessee are not included in season packets.

MURPHY CENTER ENTRANCE PLAN
General Public: Fans with general admission tickets will be able to enter the arena at 4:45 p.m. using the upper level and lower level entrances on all four corners of the arena.

BRAA Member and Season Ticket Holders: Members with valid membership cards will be admitted at 4:30 p.m. through the lower level entrances on all four corners of the arena.

Students: Students will be admitted at 4:30 p.m. at the E8 entrance on the upper level, located behind the student section.

PARKING
There will be free parking on campus for spectators. The most convenient parking will be found along Greenland Drive between Middle Tennessee Blvd. and Rutherford Blvd. Handicapped parking can be found in the main Greenland Drive lot near the arena.