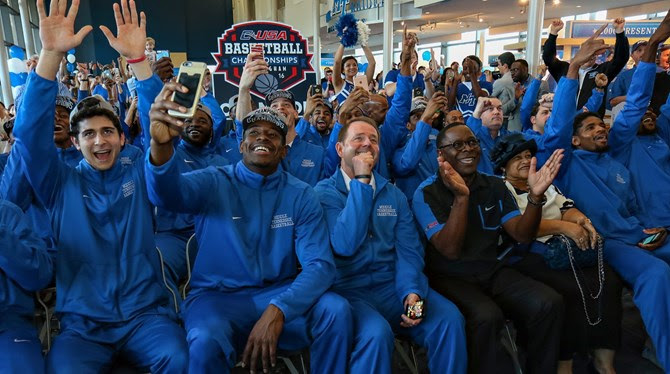 Reaction at the watch party to the announcement the Blue Raiders will be the No. 15 seed and face No. 2 seeded Michigan State in St. Louis, Missiouri, on Friday.

The Blue Raiders are just three seasons removed from their last appearance in the big dance, playing in the First Four in Dayton, Ohio in the 2013 NCAA Tournament. Middle Tennessee lost that match-up against fellow No. 11 seed Saint Mary's.

The Blue Raiders and Spartans have met only once in the history of the two programs. Michigan State won the lone meeting in East Lansing in December 1977.

There will be a watch party for the Lady Raider's at the hall of fame building, next to the Murphy Center Monday. The free event and viewing of the selection show is open to the public. Doors will open at 5:30 with the selection show beginning at 6pm.

The women's team punched their ticket to the Big Dance with their conference tournament championship on Saturday.

Middle is making its eighth NCAA Tournament appearance and is 2-7 all-time in the tournament, with its last win coming against No. 4 seeded Florida State in 1989. The other Blue Raider win came in 1982 when MT defeated No. 6 seeded Kentucky.

Head coach Kermit Davis will be making his fourth trip to the dance and second as the head coach of the Blue Raiders. Davis took the Idaho Vandals to the tournament in back-to-back seasons in 1989 and 1990 after winning the Big Sky Conference regular season and tournament championships both years.

Middle Tennessee currently stands at 24-9 and finished the conference slate at 13-5, good for the No. 2 seed in the Conference USA Tournament in Birmingham.

Junior Reggie Upshaw (13.8 ppg, 8.7 rpg) stands at or near the top of every statistical category for the Blue Raiders and was named the C-USA Tournament MVP. Senior Perrin Buford (12.0 ppg, 5.9 rpg) joined Upshaw on the All-Tournament Team, his second straight season earning the honor.

Michigan State won the Big Ten Tournament Championship on Sunday, bringing their record to 29-5. The Spartans ran through the non-conference schedule to a 13-0 start and went 13-5 in Big Ten play.