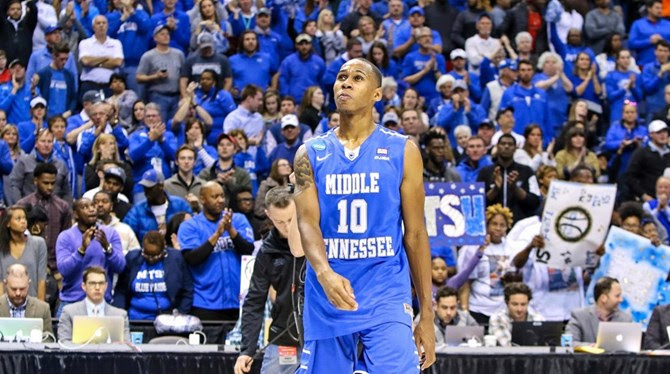 The clock struck midnight for the Cinderella Blue Raiders as Middle Tennessee fell to Syracuse 75-50 in the round of 32. It was a showdown in the Scottrade Center once again for the Blue Raiders until the final 15 minutes, when Syracuse's stifling defense gave the Orange the win in St. Louis.

Head Coach Kermit Davis told his team they will not be remembered by this game. He told them they've got a firm legacy and history at our school and in the tournament, and that's what they'll be judged on.

Middle Tennessee (25-10, 13-5 C-USA) battled Syracuse (21-13, 9-9 ACC) and even took a lead early in the second half, but a 29.7 percent shooting performance proved impossible to overcome as the Orange made 55.1 percent of their field goal attempts.

The loss puts a wrap on the season for the Blue Raiders, but they should be nothing but proud after winning 25 games, taking home the Conference USA Championship and producing one of the greatest upsets in the history of the NCAA Tournament.

On the game's opening possession, Syracuse did something Michigan State was never able to do Friday, taking the lead against the Blue Raiders with a tip-in.

Syracuse went up 4-0 before Harris got Middle Tennessee on the board with a couple of free throws and the Raiders took their first lead of the game on a Giddy Potts three-pointer on the next possession.

Syracuse answered with a three of their own and Middle wouldn't lead again in the first half. Syracuse went up by as many as 12, when they took a 24-12 lead with 9:38 to play in the opening half.

Harris cut the lead to 10 before Aldonis Foote got back-to-back baskets to make the score 24-18 just inside the six-minute mark.

Syracuse was able to extend the lead out to 10 again before MT took over for the remainder of the half. The Blue Raiders closed out the half on a 9-2 run in the final 4:43 to draw within four at 31-27.

Middle Tennessee opened the half with back-to-back triples by Jaqawn Raymond and Potts to take a 33-31 lead.

Potts drained his third trey of the game before a Buford free throw drew the Raiders back within a point at the 16:02 mark.

Syracuse then went on a 21-2 run fueled by seven straight points from guard Michael Gbinije to take their largest lead to that point in the game at 61-41 with 6:18 left to play.

Raymond finally stopped the bleeding with his third triple of the contest, but the Orange began to run down the clock with a large lead already in place and the game clock below six minutes.

Syracuse's defense won out the rest of the way and the Blue Raiders' hot shooting went missing, allowing the Orange to stretch their lead and take down Middle Tennessee.