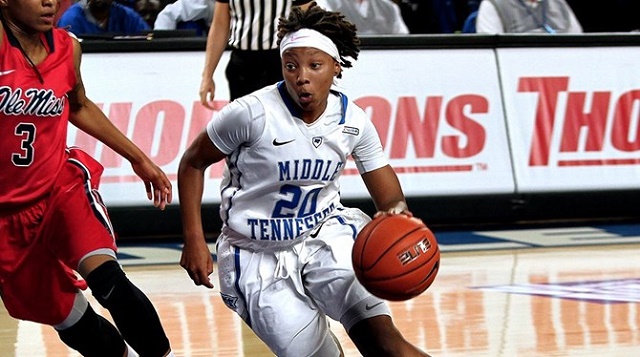 For the second time this season, Father got the best of Son...

Dick Palmer with the call of the end of the game on NewsRadio WGNS as the Middle Tennessee women's basketball team dealt Ole Miss an 82-70 defeat Thursday evening in front 2,806 fans inside the Murphy Center.

With the win, the Blue Raiders (24-9) will advance to the quarterfinals (Elite 8) of the Women's National Invitation Tournament (WNIT) and will play Temple Sunday at 4 p.m. at Murphy Center. Middle Tennessee is now 4-0 all-time at home under Head Coach Rick Insell in the WNIT.

Tickets for Sunday's quarterfinal game will go on sale at the MT Ticket Office Friday morning. They can also be purchased on GoBlueRaiders.com. Tickets are $10 for adults and $4 for MT students.

Sophomore Ty Petty put on an exceptional performance with a career-high 29 points on 11-for-16 shooting and a game-high seven assists to only one turnover in 29 minutes of action. Petty applied pressure on the Ole Miss defense right from the start and never backed off, penetrating into the lane and finding open teammates when she wasn't scoring.

Fellow sophomore Olivia Jones added 22 points while shooting 7-for-13 from the field with six boards, dishing out four assists and tallying three steals. The duo of Petty and Jones worked well off each other after combining for 51 of the team's 82 points and shooting 18-for-29.Five of Petty's seven assists went to Jones.

Junior Brea Edwards put forth a solid effort rounding out the leading scorers with 11 points and eight boards, four of which were offensive.

The Blue Raiders got off to a fast start that brought the crowd to its feet with the 7-0 run that was capped off by a 3-pointer from Jones. The run set the tone for the rest of the half that was mostly dominated by the Blue Raiders.Middle Tennessee led wire-to-wire for the 12th time this season.

From that point on, the Blue Raiders controlled the opening stanza while taking a lead as large as 15, 41-26, just before the buzzer sounded when Jones came up with a steal and connected with Petty for a wide open layup.

MT played executed well on the offensive end as it shot 14-for-24 (58.3 percent), including a stretch in the first half where they connected on 9-of-11 field goals.

The defense also played a key role in the half as the Blue Raiders limited the Rebels to just 11-of-26 shooting (42.3 percent) and stifled Ole Miss into 13 miscues.

Petty showed aggressiveness coming out of the second half with five straight points on a pair of layups and a free throw that stretched the lead to 17, 46-29.

With 17:03 left in the game and MT leading 48-33, the Rebels made a run connecting on six of their next nine field goals, outscoring the Blue Raiders 12-5 to bring the deficit to single digits, 53-45.

MT responded with six straight points to go back up by double digits on lay ups on the next three possessions by Edwards, Petty and Freshman Rebecca Reuter.