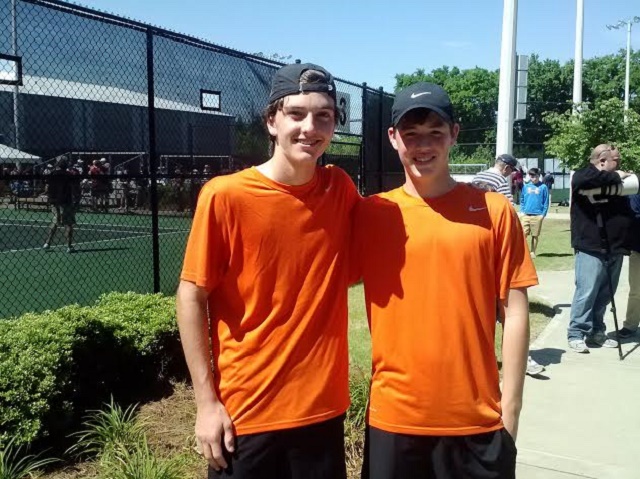 The MTCS tennis duo of junior Thomas Goodwyn and freshman Will Reeves didn't win the ultimate prize, but they nevertheless came away from the TSAAA Spring Fling with a lot of positive memories.
Goodwyn and Reeves reached the finals of the Class A-AA doubles championships on Friday before ultimately falling 6-4, 6-1 to Knoxville Catholic seniors Mitchell Jostes and Matt Holloway in the finals.
"This week was great, and it's really hard to get to the state," Reeves said. "The state is a new challenge, and we played good this week. They were just better today."
Goodwyn credited his younger teammate for helping him through a difficult week.
"I was sick, but I knew Will would keep training," he said. "Last year getting here was priceless, but we weren't that nervous this year. It was nice to beat a Notre Dame team (on Thursday). It was a very satisfying week. We've got a lot to build on for next year."
Reeves and Goodwyn defeated the team of JR Davis/Andrew Lisy (Notre Dame) 6-2, 6-3 to reach the championship match after winning their quarterfinals match as well.
Other Spring Fling tennis results
(Thursday)
Spring Fling Tennis Results
Girls Class A-AA singles
Danielle Vines (Elizabethon) defeated Jordan Berrios (Central Magnet) 6-0, 6-0
Girls Class AAA singles
Somer Henry (Brentwood) defeated Kylie Humphrey (Oakland) 6-2, 6-0
Girls Class AAA doubles
Olivia Crawley/Chloe Mitchell (Soddy-Daisy) defeated Lexie Greene/Joy Chanthanalay (Siegel) 6-0, 6-2
Boys Class AAA singles
Kato Richardson (Hendersonville) defeated Taylor Graalman (Siegel) 1-6, 6-4, 6-2
Boys Class AAA doubles
Aubrey Davis/Matthew Maynard (Knoxville West) defeated Ben Betzler/Mohammed Al-Aubaidi (Siegel) 7-5, 6-2
Read more from:
Prep Sports News
Tags:
MTCS, Spring Fling, tennis
Share: