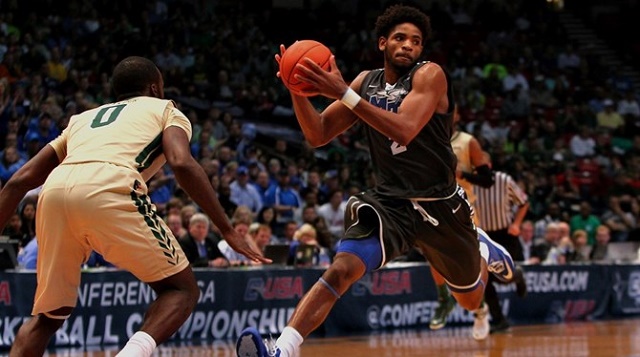 Middle Tennessee's run in the Conference USA Championship came to a close after UAB punched its ticket to the big dance with a 73-60 victory in the championship final.

The Blue Raiders move to 19-16 on the season after playing UAB in a home crowd environment in Legacy Arena in the BJCC with attendance in the finale at 8,279.

Perrin Buford opened with a point blank 3-pointer to give MT the first points of the game but UAB stormed back to go on a 9-0 run. The Blue Raiders were able to settle down after the timeout after completing some hustle plays and pulling within two points before the first media timeout.

The Blazers pieced together an 11-0 while MT suffered a five minute scoring drought that gave UAB a 27-16 lead.

"We lost our identity for about six or seven minutes in the first half," Head Coach Kermit Davis said. "We ran no offense, shot it quick, the ball didn't move and they just pounded us on the glass."

Turnovers proved to be costly in the first half as the Blue Raiders had eight turnovers and the Blazers picked up 10 points off of those turnovers.

Middle Tennessee went into the locker room at halftime down 11 with UAB holding a 37-26 lead.

UAB's hot shooting just got hotter in the second half as they shot 69.2 percent from the field and 80 percent from 3-point range in the first 10 minutes of the half to secure a 16 point lead at 60-44.

"I really thought, no question, UAB played like an NCAA Championship Tournament team today," Davis said. "Give them the right seed, they can win a tournament game. They had great guard play, their inside guys were terrific and they beat us in every aspect. We completely give UAB credit."

The rowdy arena would keep rocking as the Blazers cruised to the C-USA Championship crown with a 73-60 victory. Robert Brown led the way for UAB with 22 points with the team finishing the game shooting 51.9 percent from the field and 47.4 from 3-point range.

Middle Tennessee had three players score in double figures with Jaqawn Raymond with a team-high 12 points, followed by Buford with 11 points and DJ Jones with 10 points.

The Blue Raiders are 6-3 in their last nine games with two of those losses coming at the hands of the Blazers in Birmingham.

Both Buford and Jones earned all-tournament team accolades with their performances in the four games. Buford led the team in the tournament with 13.8 points per game while adding six blocks and three steals. Jones stepped it up to record 10.8 points per game during the championship run with nine 3-point field goals and five steals.

The Blue Raiders are still looking to play in a postseason tournament and will know more information in the next couple days.