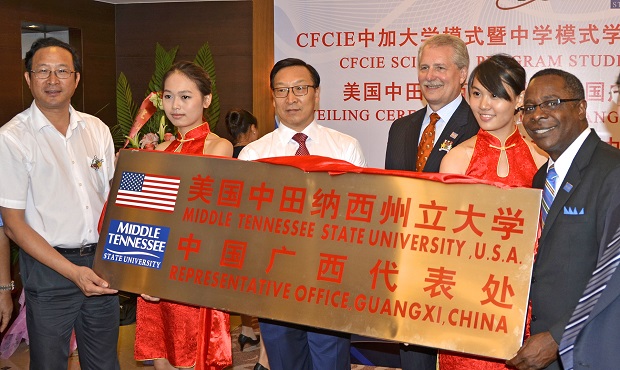 The partnership between Middle Tennessee State University and Hangzhou Normal University for a Confucius Institute on the Murfreesboro campus has been recommended for a five-year, $500,000 extension, President Sidney A. McPhee said Monday.

McPhee, who announced MTSU’s recommendation during a presentation before the Nashville Rotary Club on the university’s international outreach, said the pending extension reflects well upon the cultural and educational work by MTSU’s institute.

“This extension of our partnership with Hangzhou Normal reflects the institute’s excellent work in building friendships and broadening the international scope and reach of our campus,” he said.

McPhee and Hangzhou Normal University President Du Wei will sign the renewal contract in a ceremony in China later this month.

The Confucius Institute, named after the ancient Chinese philosopher Confucius, is sponsored by China’s Education Ministry to promote Chinese language, history and culture through tours, exchanges and university partnerships. There are more than 440 institutes in 120 countries.

MTSU joined with Hangzhou Normal to open its institute in 2010. Under the leadership of Director Guanping Zheng and Associate Director Yiping Cui, MTSU’s institute has helped teach Chinese language and culture to more than 2,000 students in seven Tennessee counties. It also offers long-distance language training through satellite TV and the Internet.

MTSU’s institute hosted 25 cultural events in 2013, attracting more than 7,000 people, a 30 percent increase over its efforts in 2012. McPhee said MTSU has “worked to keep our institute very visible – on our campus and in our community.”

“Its language programs and cultural activities have enriched our university’s curriculum, the Middle Tennessee community and our K-12 public schools,” he said.

McPhee also told the Nashville Rotarians that Vice Minister Xu Lin of China, director-general of Hanban, which oversees the network of Confucius Institutes, will speak at MTSU’s morning commencement Saturday. Xu and U.S. Army Lt. Gen. William Phillips, an MTSU graduate who will be the afternoon commencement speaker, will also receive honorary doctorates.

And McPhee said MTSU’s Confucius Institute is organizing a visit by almost 40 area school children, teachers and parents to China this July. The visit, sponsored by the Confucius headquarters and China universities, reciprocates a similar visit last summer by Chinese school children and educators to Murfreesboro and Nashville.

McPhee has made international engagement a priority of his presidency. He has worked to strengthen MTSU’s international undergraduate and graduate enrollment, expand its education abroad and cultural opportunities and develop research collaborations with international partners.

The university has 42 exchange agreements with institutions around the world, including 12 in China, “so that our teachers, students, and researchers may have the international experience,” McPhee said.

MTSU’s international student enrollment has increased from 396 to 789 in five years, McPhee said, and the university has 335 students in its education abroad programs this summer. This Saturday’s commencement ceremonies will feature graduates from 21 countries, he said.

He also told the Rotarians that MTSU will be working in May to establish ties with three additional universities in China: Shaanxi Normal University in Xi’an, the Communication University of China in Beijing, and the University of Shanghai for Science and Technology.

China Agricultural University in Beijing named McPhee an honorary professor, its highest academic award, in May 2007. He was appointed in October 2010 as senior adviser to Hanban, and was honored last December as one of Hanban’s “Persons of the Year.” The Tennessee Senate also recognized McPhee last month for his international outreach.

A book of McPhee’s photographic essays, “China: Through the Eyes of An University President,” published in July 2012 and was released internationally.