MTSU Arts brings 'Joys of the Season' to community Dec. 1 in Tucker Theatre

Get into the Christmas spirit by attending "The Joys of the Season" on Thursday evening, December 1, 2016, at MTSU's Tucker Theatre. Student Skylar Grieco, who is also the theater production assistant, tells NewsRadio WGNS many different departments will be represented at the event...

Tickets can be obtained online at MTSUArts.com. We have a video and much more information online at WGNSRadio.com.

MTSU: Joys of the Season from MTSU EMC on Vimeo.

MTSU is preparing once again to bring holiday joy to the university community with the annual "Joys of the Season" showcase of music, art, theater and dance set Thursday, Dec. 1.

The MTSU Arts event, hosted by the College of Liberal Arts, will be presented at 7 p.m. Dec. 1 in the university's Tucker Theatre inside the Boutwell Dramatic Arts Building.

General admission tickets are $10, and children in grades K-12 and seniors age 55 and up can attend for $5 each. MTSU students can attend free with a valid ID.

Tickets can be purchased in advance at http://www.mtsuarts.com or by calling 888-71-TICKET (888-718-4253). Tickets also will be available at the Tucker Theatre box office an hour before curtain time.

MTSU alumnus Larry Tolbert, a Murfreesboro attorney and longtime Blue Raider men's basketball game announcer, will serve as "Joys of the Season" master of ceremonies. Men's head basketball coach Kermit Davis will make a guest appearance especially for the children in the audience.

"The College of Liberal Arts is pleased to offer Joys of the Season to our community again this year," said Karen Petersen, interim dean of the college. "It's a great way to kick off the holidays while showcasing our exceptionally talented faculty and students."

"Joys of the Season" launched in 2015 as a way to showcase the college's performing and fine arts departments and to express the university's gratitude for decades of community support.

This year's show will feature a collection of holiday performances and artwork aimed at entertaining and delighting the entire family, including dance, storytelling and vocal and instrumental productions, often in multiple combinations, presented by students and faculty in the College of Liberal Arts.

Proceeds from "Joys of the Season" benefit MTSU Arts, which the College of Liberal Arts founded in 2011 to enhance opportunities for students in the Department of Art, Department of Theatre and Dance, and the School of Music, and bring together supporters of the fine and performing arts across Middle Tennessee.

You can get a preview of the diversity of entertainment for this year's show by watching a video from the 2015 performance, captured by MTSU's Department of Electronic Media Communication, at https://vimeo.com/emcmtsu/joysoftheseason. 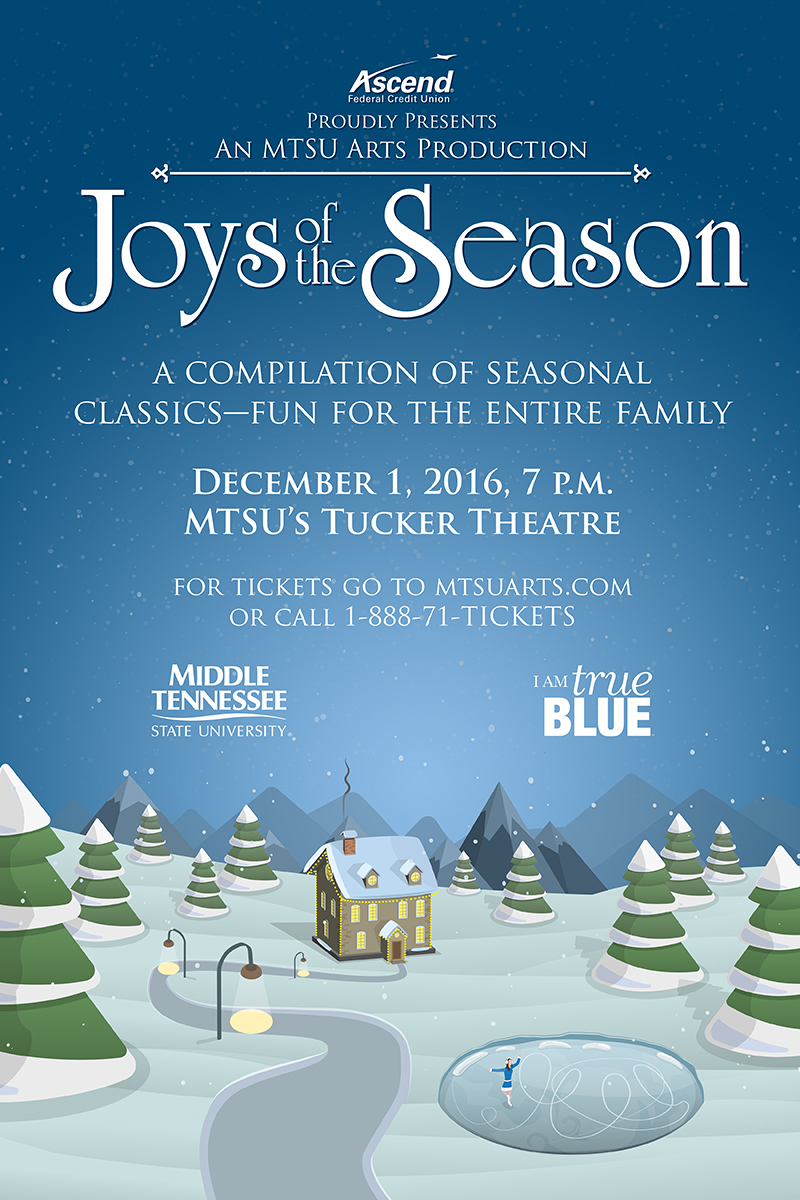