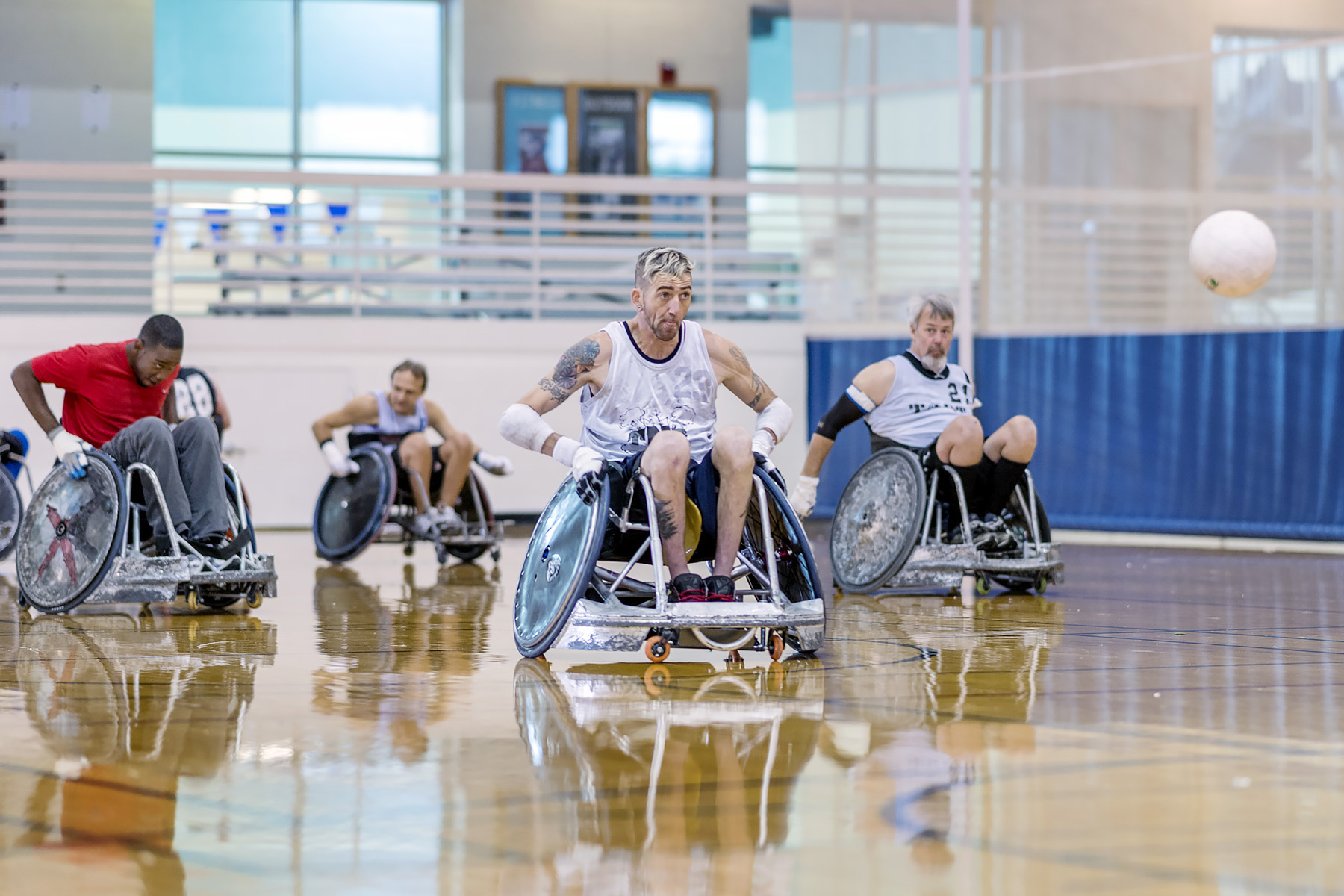 Prior to this semester there were only two universities in the country with a wheelchair rugby team affiliated with them.

The team was formally founded a year ago this month after the extensive work of MTSU Exercise Science faculty adviser Gerald Christian, who also serves as team manager. The team will compete as the QuadCrushers this season as a part of the United States Quad Rugby Association, which has teams representing cities and states all across the country.

"We have really awesome disabled student services. The campus itself is very open-minded and handicap friendly," said Christian, a quadriplegic since being injured in a car wreck as a teenager. "We wouldn't even have it if the school wasn't as accessible or accommodating as they are."

Wheelchair rugby is considered one of the most physically demanding quadriplegic sports. Games are played inside on hardwood courts and physical contact between wheelchairs is an essential part of the game. The QuadCrushers practice on auxiliary basketball courts in Murphy Center and the Campus Recreation Center.

The MTSU-based team recently competed in its first ever tournament in Fort Wayne, Indiana, and defeated the state of Indiana's team 38-20 in its first match. They would later go on to face teams from Chicago, Detroit, and Texas, taking losses in each but gaining valuable experience along the way.

The dream for Christian and those involved is to eventually make MTSU's wheelchair rugby team a club sport so that the program will be able to officially represent the MTSU at athletic events and showcase the university's commitment to disabled students.

Officially becoming a club sport could prompt other universities across the nation to follow in the steps of Houston and MTSU and start their own wheelchair rugby programs and leagues.

"MTSU is extremely accommodating to individuals with disabilities, so it would be great to represent MTSU by competing across the nation," Christian said. "We will see where it goes, and how much student involvement we get."

Even though the program has just started, "Full House" actor John Stamos already thinks highly of it, posting a news story about the team by student television station MT10 News to his Facebook profile. The story has been viewed at least 200 times and shared another 15 times.

You can watch the MT10 News story at https://youtu.be/evXBWW4GnMI.

Stamos and Christian met at a Beach Boys concert a few years ago and have remained friends and kept in touch ever since singing the group's classic "Surfing USA" after the group invited Christian on-stage to sing.

Christian began the process of developing a team by consulting with the director of adaptive athletics at the University of Houston, Michael Cottingham. Cottingham started the only other two wheelchair rugby teams at Houston and the University of Phoenix.

Christian eventually turned to MTSU Campus Recreation's adaptive recreation and exercise coordinator Caleb Paschall. With Paschall's assistance he was able to get the wheelchair program listed as an Adaptive Rec program.

While the process of organizing a team was strenuous, Christian again lauded the university's open-minded environment regarding people with disabilities. Paschall is pleased to be a part of the process and credited Christian for doing most of the legwork.

"This was really Gerald's baby. He was working on this for a few years before he came to me and I'm just glad we're finally doing this on campus," Paschall said.

The rec program is all-inclusive. Both disabled and non-disabled students are invited to come out to learn, watch and even play.

The QuadCrushers will compete in multiple tournaments this year and the state of Alabama's wheelchair rugby team, Lakeshore Demolition, will be traveling to MTSU for a contest in January, which Christian plans to promote around campus.

Paschall is confident that the program would be able to meet Christian's expectations.

"I definitely think it will grow. Right now we're just trying to get it off the ground and get more people to know about it and eventually join," he said. "You have to have a certain amount of students involved to be considered a club and I think we'll get there once more start to find out about this."

While Christian is quick to point out that his goal may be years down the road, the benefits of the program for both disabled and non-disabled students is already clear to see.

"It's been really big for people to experience new things and see sports really is for everyone... We eventually want people to come here because of this. It's benefitted a bunch of people in many different ways," Christian said.