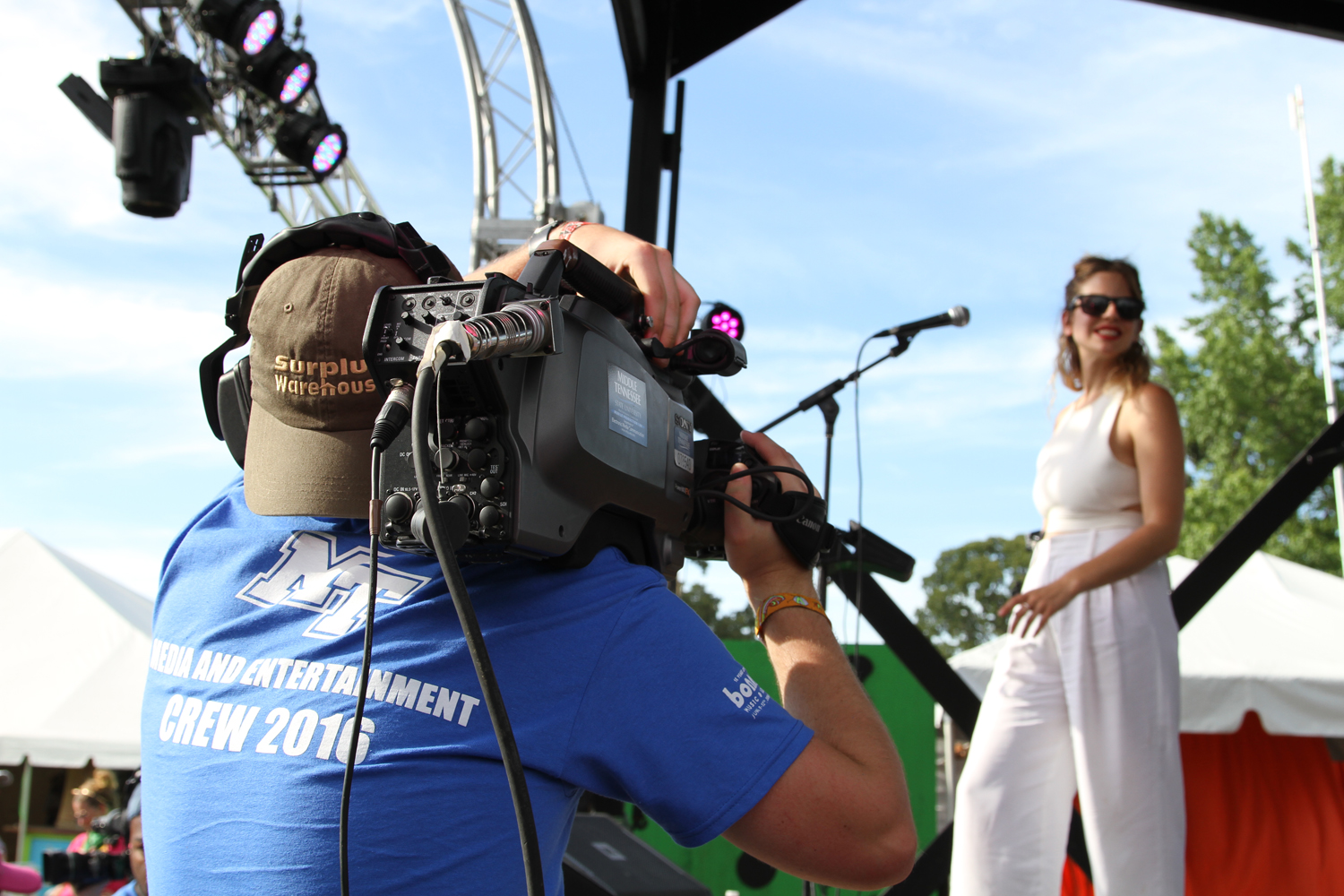 An MTSU College of Media and Entertainment student films the band Doe Paoro on Thursday on the Who Stage at the 2016 Bonnaroo Music and Arts Festival in Manchester, Tenn. About 40 MTSU students are working at the festival getting hands-on multimedia experience. (MTSU photo by Rob Janson)

Year three of Middle Tennessee State University's partnership with Bonnaroo is again providing students with a uniquely immersive experience that can't be found in any on-campus classroom.

About 40 College of Media and Entertainment students will be producing multimedia content from the 2016 Bonnaroo Music and Arts Festival, which started Thursday and runs through Sunday and features such big names as Pearl Jam, Miguel and Chris Stapleton performing on stages throughout the 700-acre site.

"Our partnership with Bonnaroo has given our students a truly singular experience, transferring the skills they've learned in the classroom to the grounds of one of the world's pre-eminent music festivals," said Ken Paulson, dean of the College of Media and Entertainment.

"From photography and videography to journalism and the recording industry, the MTSU experience at Bonnaroo reflects the wide range of media we embrace in our college."

For the second straight year, MTSU's $1.7 million Mobile Production Lab, known as "The Truck," will work the Who Stage at the event, with world-class video and audio production equipment on hand and CME students operating a variety of cameras to help chronicle slices of the 15th anniversary edition of one of the world's biggest music festivals.

Kaelin Michelle Bastin, a senior electronic media communication from Springville, Utah, is working as production manager for the student team, for many of whom "this is their first time that they'll be using the truck outside of on-campus events."

"So for them this is a new experience going to the venue, being at a venue that they haven't seen before, so it provides them experiences that we don't get necessarily sitting down in the classroom," Bastin said. "And on top of that we're switching out positions, so we get to try out different positions, and it helps us really develop who we want to be in their career instead of just being set of one thing throughout."

Michael Fleming, associate professor in the Department of Recording Industry, noted that the university's ongoing relationship with Bonnaroo also has led to an opportunity to bring the on-site experiences back to the classroom.

"Our media and educational partnership with Bonnaroo has evolved to the point that this summer I'm teaching a graduate (Master of Fine Arts) and undergraduate audio production course focused on live location music recording and subsequent post-production of performances on the Who Stage that we'll capture over four days in conjunction with a student, faculty and staff video-production crew on board our television truck," Fleming said.

"This is a remarkable learning opportunity for students in the College of Media and Entertainment. We're really grateful that the festival is so supportive of both our live production work and the opportunities for embedded journalism and photography students to document the festival again this year."

This is the third year of a partnership Paulson brokered between MTSU and the organizers of the annual festival following 2014 campus visits by Bonnaroo founders Ashley Capps and Rick Farman as well as Bonnaroo directors and organizers to talk about the mechanics of the festival.

The mutually beneficial relationship provides the festival with quality production and content while students gain the types of hands-on experiences that boost confidence and resumes.

When MTSU students arrived at Bonnaroo a year ago, the name College of Mass Communication was entering its final summer of existence as its new name became official that fall to reflect the broad range of academic specialties housed within the college.

"We renamed ourselves the College of Media and Entertainment to reflect a real shift in our approach and curriculum from mass communication to targeted, multiple media delivered through diverse platforms," Paulson said. "Bonnaroo has mastered that kind of multi-faceted content creation and marketing, and offers a great learning opportunity for our students."

MTSU's College of Media and Entertainment, which is the fifth largest communication program in the nation, offers degree concentrations in 14 major areas -- ranging from the recording industry to journalism to filmmaking and animation-- and is accredited by the Association for Education in Journalism and Mass Communication.