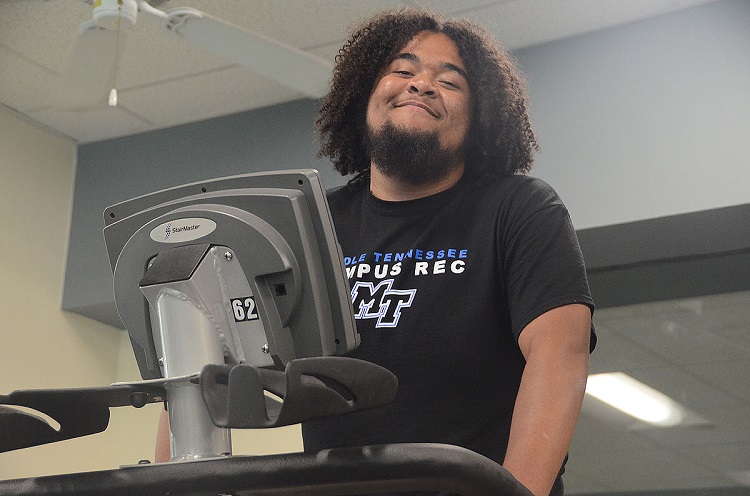 In the fall of 2016, MTSU student Caleb King had no idea that an elective class would change his outlook on his health -- and change his life for the better.

A 100-pound weight loss journey that started in the Murphy Center and became permanent at the MTSU Recreation Center, better known as the Rec, now leaves King only 15 pounds away from his desired weight.

The MTSU rising senior from Manchester, Tennessee, who now works as a supervisor at the Rec, recalls having a hard time changing his lifestyle.

He was a 19-year-old student standing 5 feet 11 inches and weighing 315 pounds when he stepped foot into health and human performance professor Shannon Josey's health class during his sophomore year. King's weight impacted everyday activities, and he often found himself becoming sick.

Admittedly seeking "an easy A," King said he never expected to get so much more out of Josey's class.

"I never thought it would have a huge impact on my life," he said. "When she started to go over topics about health risks, I knew something had to change."

The first step was cutting all sodas out of his diet and working out three to four days a week.

"I could hardly run a mile without running out of breath," King recalled. "I had to listen to my body, and realize exactly how much pressure it could take."

After figuring out what worked for him, King kept track of his progress and managed to lose 20 pounds in two months using the workout equipment at the Rec such as the elliptical, step machine, leg press, chest press and the treadmill.

The proudest moment of his journey was purchasing a new wardrobe after his clothes didn't fit him anymore. As King became more confident in his journey toward good health, the more pounds he lost.

"I could run five miles with ease, go biking, do workouts at the gym," he said. "It was a great feeling."

It wasn't long before King had lost 50 pounds, and boosted his workouts to six days a week at the Campus Rec. Switching up his routine in order to give his body a change, the audio production student finds motivation through positivity and believes that if he feels better, he will live better.

King said he definitely feels better. He has lost 85 pounds so far in a year and a half and looks forward to moving past the 100-pound loss mark in the near future.

"One hundred pounds is a significant amount of weight, but I lost it my way," said King. "I would tell anyone who is looking to go on a weight loss journey to stick to it."

The MTSU Campus Recreation Center is available to MTSU students, faculty and staff. Semester-based memberships are available for student families, employee families, alumni and families, part-time and adjunct employees and their families. Other specialized fitness classes and resources are available to all for nominal fees.

For more information, visit http://www.mtsu.edu/camprec/index.php or contact the Rec Center at camprec@mtsu.edu or call 615-898-2104.