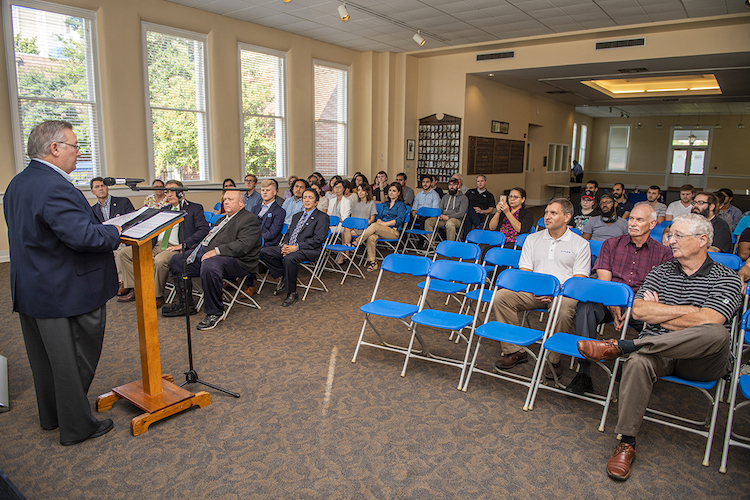 Middle Tennessee State University academic officials laid the groundwork for a new mechatronics engineering program in 2012-13. With the state's blessings, the program went from ground zero in early August 2013 to 20 students that first semester.

Five years and nearly 400 students later, mechatronics is a fast-growing program that's already graduated 66 students earning $65,000 to $75,000 per year -- and received a titanic boost by recently gaining accreditation from the Baltimore, Maryland-based Accreditation Board for Engineering and Technology Inc., or ABET, and its Engineering Accreditation Commission.

It is a program retired Bridgestone North Americas Inc. corporate manager Keith Hamilton said is "a step toward moving MTSU into being the premier engineering school in the Southeastern part of the United States." And it is a program master of ceremonies Tonya Scott referenced as growing "from imagination to accreditation."

Mechatronics is a multidisciplinary field of engineering that includes a combination of systems, mechanical, electrical, telecommunications, control and computer engineering. The program is based on a three-level international certification program created by Siemens, a German engineering company and MTSU partner.

The Department of Engineering Technology hailed the accreditation achievement with a celebration Friday (Sept. 21) in the Tom H. Jackson Building's Cantrell Hall.

"It is a pretty big deal," said Walter Boles, engineering technology chair, who has been a facilitator of the program since the beginning, referencing the accreditation. "We're celebrating a milestone and what mechatronics means for the community, our students, industry partners and Tennessee's economy."

The ABET action is retroactive to 2015 ("to cover all graduates," Boles said) and the MTSU accreditation status will appear on ABET's website in October, he added. ABET is an organization that accredits postsecondary education programs in applied and natural science, engineering and engineering technology.

"It confirms the quality of our mechatronics program and should reassure students that they will receive a high-quality education," Byrnes said.

College of Basic and Applied Sciences Dean Bud Fischer said the "highly successful ABET accreditation of the MTSU mechatronics program is evidence the program has met the high standards needed to produce graduates ready to enter this critical field of engineering."

"Students graduating from this program receive a solid educational foundation and are certainly sufficiently prepared for entry into the engineering profession," Fischer added.

Hamilton, who led Bridgestone's North America Manufacturing Education Center and is a Franklin County resident, said he's "just elated that it's (accreditation) happening. It's a remarkable accomplishment -- an accomplishment no one else believed could be done. It has gone beyond everyone's expectations."

Mechatronics is seeing an increase of about 100 students per year. Sixty students will graduate in May 2019.

"There's a very high demand for our graduates," Boles said.

State Sen. Shane Reeves of Murfreesboro told the crowd he is "excited about the future of mechatronics" and he "will do what we can to get money for an (engineering) building" to house the growing program and department.

As an undergraduate, Elijah Little was undeclared until he "heard about mechatronics. It seemed to fit the bill. Being a part of the Experimental Vehicles Program helped me utilize my skills and knowledge, and I'd like to thank MTSU for all the opportunities it has given me." He is now earning a master's in engineering management.

MTSU has articulations agreements with Motlow, Roan State and Cleveland State community colleges and is working on an agreement with Volunteer State Community College, allowing students from the colleges to transfer to MTSU "and receive a significant amount of transfer credit toward the bachelor's degree," Boles said.

Motlow, which confers associate degrees to its graduates, offered the first mechatronics program in Tennessee and is considered one of the best in the nation. It joins with MTSU to assist area high school programs at Oakland and others. Industry partners pushed for MTSU to offer the four-year bachelor's degree.

Hamilton, Jimmy Davis with The Davis Groupe and other industry partners attended the event. Another major partner is Smyrna, Tennessee-based Nissan North America, which was represented by Kevin Smith, now retired and others. Alumna Sarah Jost also shared about her positive mechatronics experience.

"With achievement comes a new set of challenges," said Davis, who added it is imperative MTSU "get an engineering school, a new building and add a master's program" in mechatronics.

Including mechatronics, MTSU has more than 300 combined undergraduate and graduate programs. Mechatronics and engineering technology are part of the College of Basic and Applied Sciences.