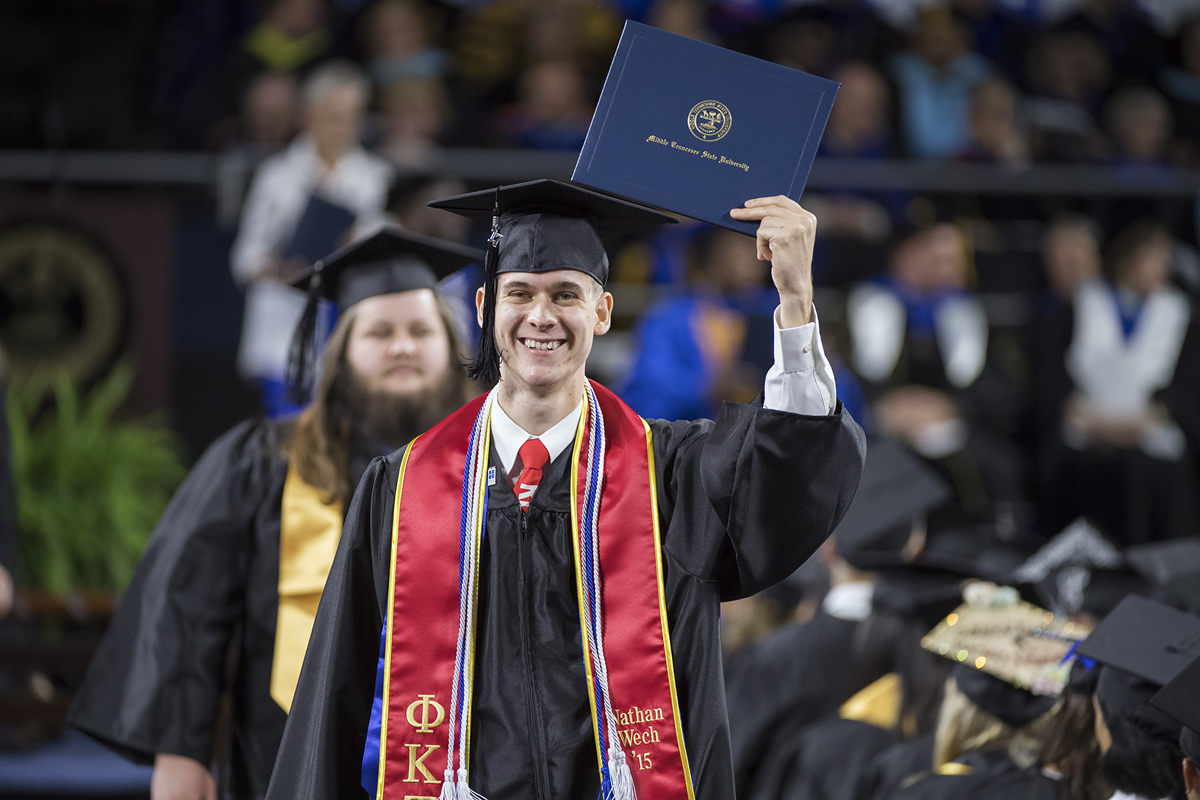 New MTSU graduate Nathan Wech of Corryton, Tenn., holds his hard-earned bachelor's degree in aerospace aloft as he returns to his seat during spring 2017 undergrad commencement inside Murphy Center Saturday, May 6. Wech was one of 2,543 MTSU students receiving degrees over two days in three ceremonies. (MTSU photo by Andy Heidt)

Middle Tennessee State University is responsible for about 8,400 jobs across the state, which generates $1.12 billion in revenues and over $408 million in wages and salaries, a new economic report released Tuesday (June 27) shows.

The report by the Business and Economic Research Center in the Jones College of Business shows MTSU, as Murfreesboro's second-largest employer, is also responsible for generating $88 million in local, state and federal tax revenue.

"There is no question that Middle Tennessee State University is unrivaled in what it brings to the table for our city, county and region," MTSU President Sidney A. McPhee said at an event held at the Rutherford County Chamber of Commerce.

"Much of who we are now, and what we want to become in the future, depends upon the continued health and prosperity of your university," McPhee said.

The study shows MTSU is responsible for almost 8,400 jobs across Tennessee. Of that total, 2,259 of those jobs come from MTSU's direct employment.

"But, when you combine the jobs that come as a result of our employees living and buying in our community, that total goes up to nearly 3,400 jobs," McPhee said.

And, the president noted spending by students accounts for more than 1,800 jobs alone.

"I hope each and every one of us here today appreciates the vast and significant economic impact that our student population brings to the local economy," he said.

Rutherford Chamber President Paul Latture called MTSU "truly an economic engine with an impact that adds to the growing landscape of a region that is one of the fastest emerging in the nation."

Said Latture, "We are grateful to have MTSU in Rutherford County, and we look forward to more great things to come in the future."

That sentiment was echoed by Chamber Chairman David Urban, dean of the Jones College of Business: "This study provides additional proof of the profound impact that MTSU has on our region and the state."

"This means, simply, that we are more than fulfilling our mission to educate Tennesseans and, even better, most of those we educate stay in Tennessee," McPhee said. "That means a better educated, more capable workforce for our state."

To that point, in the area of skilled workforce development, McPhee said MTSU graduates account for one in every two adults with a higher education (bachelor's degree and above) in Rutherford County.

And, he said, MTSU graduates account for one in every five adults with a higher education (bachelor's degree and above) degree in the Nashville metro area.

"In other words, we're not just keeping students from Rutherford, we're keeping many of those college-educated students who hail from other parts of Tennessee," McPhee said.

McPhee pointed to Murfreesboro Mayor Shane McFarland as an example of MTSU's ability to retain talent who came to the city from elsewhere. He pointed out that the mayor first arrived to the city as an MTSU student from Grundy County.

Outside of Rutherford County, McPhee said, MTSU keeps 85 percent more students in the Nashville Metro area than we enrolled as freshmen. "That means our entire area benefits from this continuous flow of graduates," he said.

Finally, McPhee reminded that MTSU is a source of diverse cultural, academic, business, community, educational, and sports events and activities. "That not only contributes to the quality of life of our citizens," he said, "that also brings dollars to this area."

The study shows MTSU brings nearly 500,000 people to Rutherford County each year; spending by visitors accounts for more than $56 million; and that translates to almost 830 jobs.

Bill Jones, chairman of the Rutherford County Industrial Development Board, said "it cannot be overstated how important MTSU is to Rutherford County specifically and to the entire Middle Tennessee region as a whole."

"The financial impact of having a large, major university in your community is something this study clearly demonstrates and now exceeds $1 billion in the region," Jones said.

"The impact on the quality of life owing to having an institution of higher learning the quality of MTSU in Rutherford County enhances everything about our community, from athletics to arts to science, and everything in between."