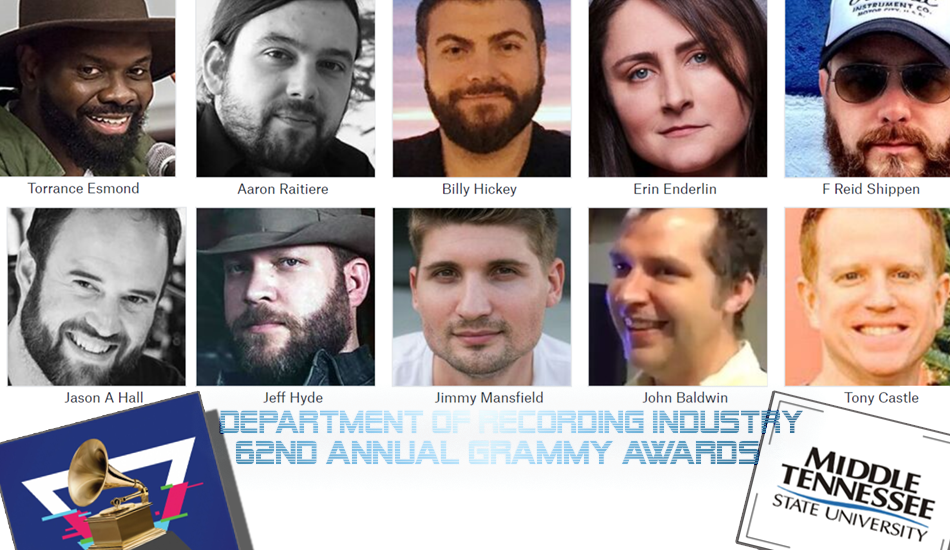 MURFREESBORO, Tenn. -- MTSU graduates are back in the headlines again with recognition for their music-industry work in multiple genres on the highest level: nominations for the 62nd annual Grammy Awards.

All will be recognized during MTSU's annual "Grammy weekend" gathering in Los Angeles, where alumni and former students are saluted and current students travel with faculty and staff to learn firsthand about the awards event. It airs live Sunday, Jan. 26, on CBS.

The newest slate of nominees includes:

• Multi-Grammy winner Torrance "Street Symphony" Esmond, a 2003 music business graduate who's back on the list with his production work for the Alphabet Rockers, this time earning a best children's album nod for "The Love."

• Billy Hickey, a 2006 recording industry production and technology alumnus who's part of the team nominated for a record of the year Grammy for Ariana Grande's "Seven Rings" single. He also earned a second engineering nomination via Grande's best pop vocal album candidate, "thank u, next."

• Jeff Hyde, a 2003 marketing grad from the Jones College of Business, who's nominated for the best country song Grammy for co-writing "Some of It" for Church. The song also is part of Church's "Desperate Man" album.

• 2009 Master of Fine Arts alumnus Aaron Raitiere, whose "I'll Never Love Again," co-written for the 2018 update of"A Star is Born," was nominated for the Grammy for best song for visual media.

MTSU 2004 music business alumna Erin Enderlin, for example, isn't directly nominated for a Grammy this year, but she's part of McEntire's country album-nominated project by writing "The Bar's Getting Lower" for the collection.

Hall and Mansfield were nominated last year in the same country album category for the Brothers Osborne's "Port Saint Joe," and Mansfield also earned a nod for Ashley McBryde's "Girl Going Nowhere" collection. They're getting a second shot of Grammy respect through those projects this year, too, though no awards: McBryde's album title track is nominated for best country solo performance, and the Brothers Osborne's "I Don't Remember Me" from "Point Saint Joe" is included in the best country duo/group performance category.

MTSU alumni, former or current students, and faculty from across the university have been a part of more than 75 Grammy Award nominations in the last decade. So far 10 have won a total of 30 Grammys, including seven repeat recipients, in categories from classical to pop to country to gospel since 2001.

In 2019, MTSU's recording industry department made Billboard's annual list of America's top music business schools for the sixth year, once again joining its counterparts across the country as top producers of ready-to-work music industry pros.

MTSU leaders are finalizing plans now for the university's seventh annual visit to the music industry's biggest ceremony to congratulate nominees and salute MTSU's Grammy ties. They meet with alumni, too, and send students and faculty to backstage and pre-show Grammy events, providing experiential education opportunities alongside those at the annual CMA Awards, Bonnaroo Music and Arts Festival and the Academy of Country Music Awards telecast.

For more information about the Department of Recording Industry in MTSU's College of Media and Entertainment, visit http://mtsu.edu/recording-industry.

More details about the upcoming Grammy Awards ceremony are available at http://Grammy.com.