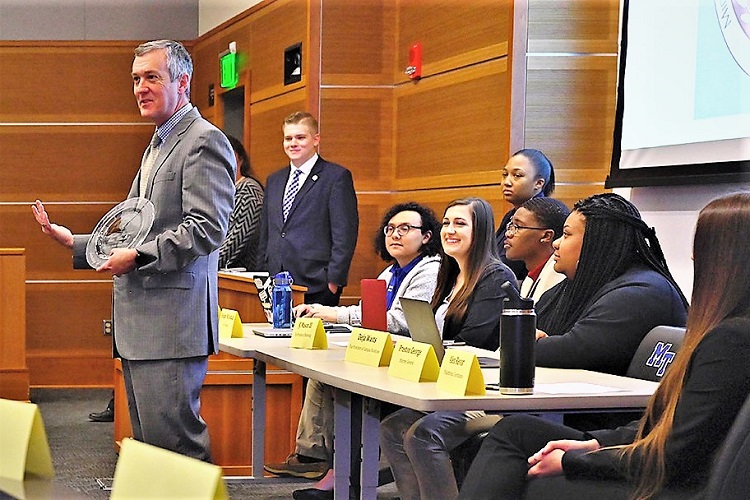 The award, given to the top four-year university in the voter registration challenge, was presented to Student Government Association President Delanie McDonald Thursday, Feb.12, in the Student Union Parliamentary Room.

The competition took place in September in honor of National Voter Registration Month. Of the 2,000-plus students who registered at 48 participating schools, MTSU pulled in 381 new voters. Northeast State Community College and Carson-Newman University were the other schools selected in the community college and private university categories respectively.

"Congratulations to the dedicated Middle Tennessee State University students who played a pivotal role in registering their fellow students to vote," said Hargett. "They are the future leaders of our state, and it's exciting to see the MTSU community get engaged and excited about the political process."

Winners were chosen based on the number of new students registered, their social media presence (both weighted by student enrollment) and the creativity in promoting the college voter registration drive.

"MTSU is honored to receive such a statewide recognition," said McDonald. "A key value within the university's True Blue Pledge is being engaged within our community, and voting is one of the most effective ways to participate in that civic responsibility."

MTSU Constitution Day coordinator Mary A. Evins, an associate research professor in MTSU's University Honors College and coordinator for the campus chapter of the American Democracy Project, is proud of the initiative taken by the students at MTSU.

"We're so glad to have a visible, proactive, energized presence on our campus that emphasizes the importance of voter registration and voting," said Evins. "Particularly for the many MTSU students who are engaging in this precious American right and duty for the very first time."

MTSU has participated in the American Democracy Project since its establishment in 2003. The goal of the project is to prepare college graduates who understand and will become active participants as citizens within a democracy.

"I'm so appreciative of the students and student leaders on our campus who are active citizens and who support the American Democracy Project's ongoing efforts to raise voter participation among our own students as well as across college and university campuses throughout the state," Evins added.

MTSU also continues its partnership with the Rutherford County Election Commission to fulfill the "True Blue Voter" initiative in an effort to increase voter awareness.