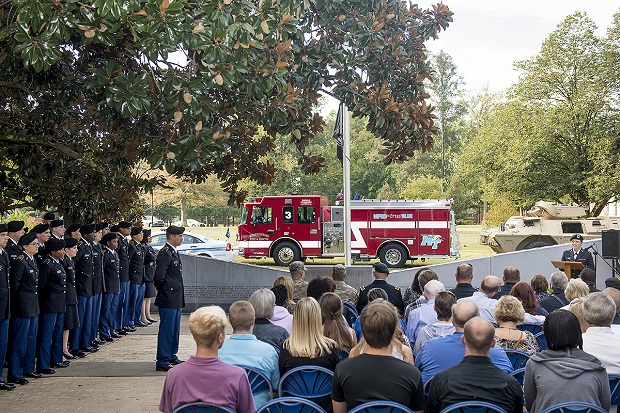 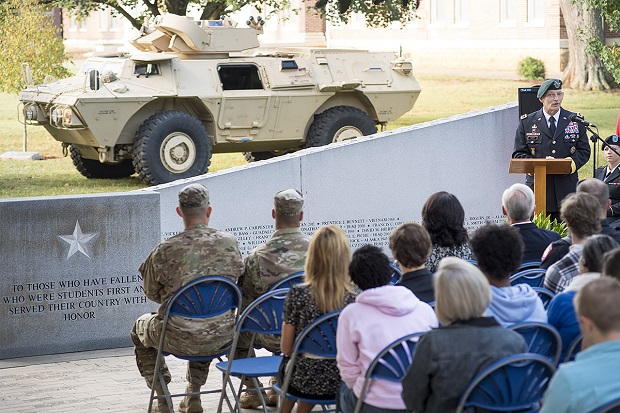 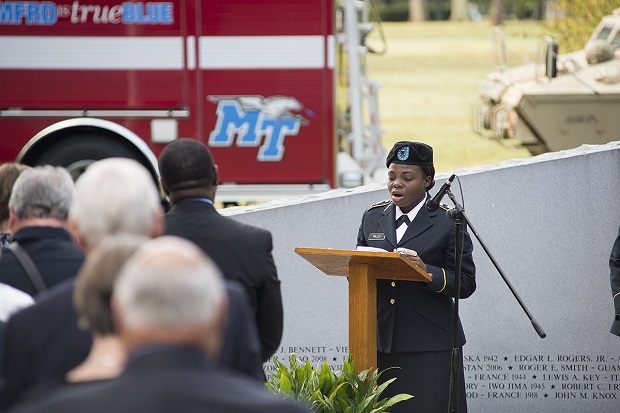 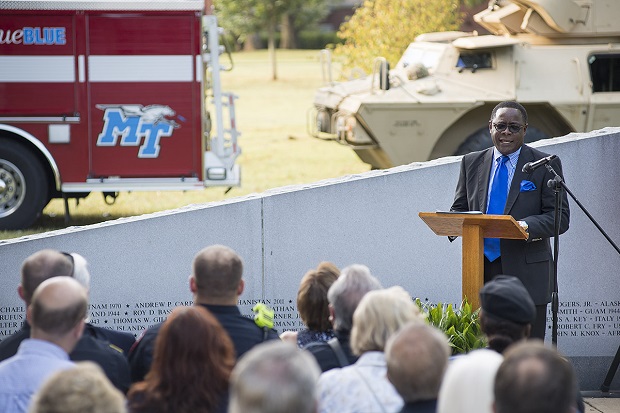 MTSU's Department of Military Science held the event to commemorate the 15th anniversary of the terrorist attacks that occurred Sept. 11, 2001, killing nearly 3,000 people at the World Trade Center, the Pentagon and in Pennsylvania. MTSU President Sidney A. McPhee said the terrorists "failed" at their goals because the attacks didn't demoralize America and didn't deter the nation's fighting spirit, but instead brought Americans closer together...

Retired U.S. Army Lt. Gen. Keith M. Huber, senior adviser for veterans and leadership initiatives at the university, noted that 65 MTSU alumni have given their lives defending the nation, seven of those since 9/11. To view a short video from the event, log-on to WGNSRadio.com, keyword memorial.

As she recounted details of the hundreds of first responders who lost their lives saving others as the Twin Towers collapsed in New York 15 years ago, MTSU senior ROTC cadet Sara Crum had to pause as emotion increasingly tightened its grip on her every word.

"I'm sorry y'all," she told the crowd before continuing her welcoming remarks to those gathered early Sunday morning for Middle Tennessee State University's 9/11 Observance Ceremony held at the Veterans Memorial outside of the Tom H. Jackson Building.

Crum was among several U.S. Army ROTC cadets who shared their reflections about the impact of that tragic day on their young lives. A fifth-grader at the time of the attacks, Crum recalls her teachers bringing a television into their classroom as the attacks were unfolding.

"We actually watched the towers fall," she said. "... I didn't know then that I was going to join the U.S. military, but I stand here today, 15 years later, proud to have joined, proud to serve for the best fighting force in America and proud to serve for you all."

"Today is a day of remembrance, of reflection and of response," said Huber, who spent nearly 40 years in the military, retiring as a three-star general.

At the time of the Sept. 11 attacks, Huber was a senior one-star general serving as the appointed commander of U.S. forces in Kosovo. Upon learning of the first plane striking one of the Twin Towers that morning, Huber said he at first thought some sort of malfunction must be to blame. But after an aide informed him of the second plane minutes later, he immediately knew "we're at war."

Ten years later, he was a part of that war, serving in Afghanistan overseeing detention operations for two years as America's military continued the fight against al-Qaida. He joined MTSU in January 2015 to bolster the university's strong commitment to student-veterans and their families and "serve these incredible men and women."

"Never forget," Huber told the crowd. "Remember where you were and how it impacted you, reflect on how precious life is and that life is not a spectator sport. And you must respond and you must focus on being worthy as an individual and as an organization of the democracy that is provided at such a cost."

"It is indeed also fitting and proper that we held this ceremony here, on our sacred ground and on the 105th anniversary of the founding of this outstanding university, to remember the 9/11 victims," he said.

"So let us today, on this very important spot, at this proud university, rededicate ourselves to the task of teaching this history to our future generations, so that they can reflect upon not just the cowardly acts and deeds of these terrorists, but the courage and commitment of those in our nation who would not allow those atrocities to go unanswered."

The ceremony opened with a prayer and moment of silence led by cadet and graduate student Shanika Willis, president of the Blue Raider American Veterans Organization or BRAVO, and ended with "Taps" performed by cadet Joe Bell.

More than 30 ROTC cadets attended the ceremony, along with members from the Murfreesboro fire and police departments, MTSU Police Department and Tennessee Army National Guard.